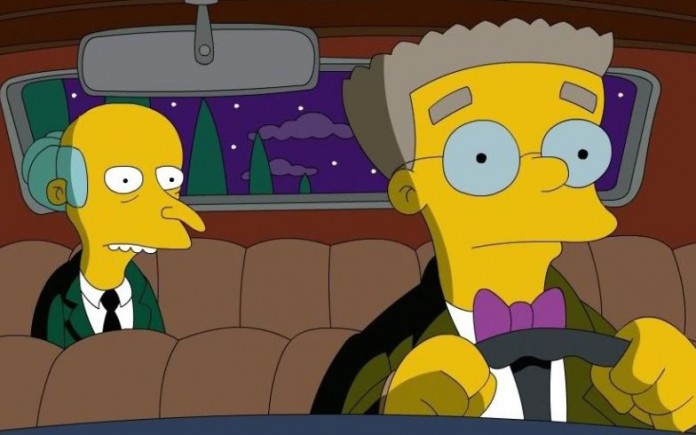 After 26 years, 27 seasons, and more questions than a nosey grandmother, Waylon Smithers is officially coming out of the closet!

Smithers, assistant to maniacal power plant owner Mr. Burns, will come out in episode 17 of “The Simpsons” titled “The Burns Cage.”

“When Smithers is devastated by Burns’ lack of affection towards him, Homer makes it his mission to find him a boyfriend.

The Simpsons has frequently tackled the issue of sexuality in several LGBT-themed episodes.

Most notably when same sex marriage was allowed in Springfield and Marge’s sister Patty comes out as gay, (“There’s Something About Marrying”) or the superb episode starring John Waters when Homer questions his own son’s sexuality (“Homer’s Phobia”).

Whether or not Mr. Smithers will finally get to bag Mr. Burns is highly unlikely, but stranger things have happened in Springfield — yes you, Armin Tamzarian.

Speaking with TVLine, show runner Al Jean said Smithers’s sexuality would be a storyline during the 27th season.

“We deal with that in two episodes. … We actually do a lot with Smithers this year; he gets fed up with Burns not appreciating him and considers his options.”

Smithers’s affection for Mr. Burns has been shown frequently on the show, but the character has never explicitly stated his feelings.

The episode airs on April 3 in the U.S.