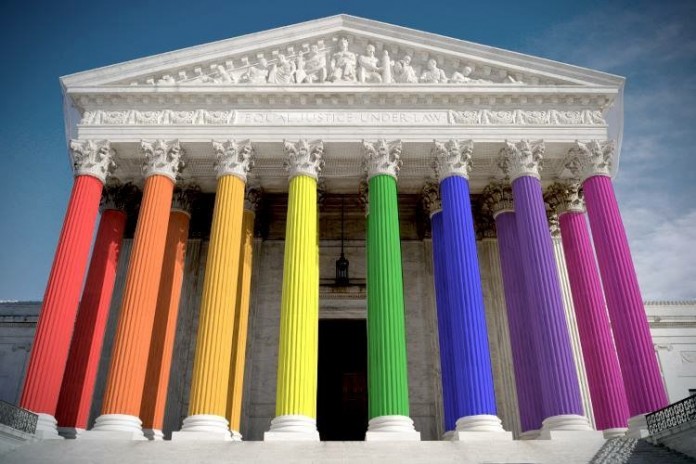 “Their hope is not to be condemned to live in loneliness, excluded from one of civilization’s oldest institutions. They ask for equal dignity in the eyes of the law. The Constitution grants them that right.”

And with those words from Justice Anthony Kennedy, the US Supreme Court delivered a historic 5-4 decision that makes gay marriage legal across all fifty United States of America and brings that country legally into line with the United Kingdom, Ireland and New Zealand.

On a weekend that will see the LGBTI community step out for numerous major pride parades and marches across America the US Supreme Court justices have made their decision.

President Obama shouted about the decision from the White House saying it was a “victory for America”.

During a short speech on Friday in the White House Rose Garden, Obama called the decision the culmination of decades of activism by proponents of same-sex marriage.

“Those countless, often anonymous heroes, they deserve our thanks,” he said. “They should be very proud.”

America’s quest for equality, Obama said in his remarks, often comes as “two steps forward, one step back, propelled by the persistent effort of dedicated citizens.

“And then sometimes, there are days like this when that slow, steady effort is rewarded with justice that arrives like a thunderbolt,” he said.

The north side of the White House was lit Friday evening with multicolored lights to celebrate the decision.

Many would see this as the day Marriage Equality finally came to the masses for those on the front lines, the struggle probably seemed to take forever.

But the legalization of same-sex marriage will be studied for years to come because change – legal, political, and social – happened at a pace that was, by historical standards, breathtaking.

And now its on to Australia, will this further push the Australian parliament into an historic decision in their soring sitting, time will tell.

In the interim lets all celebrate pride weekend in the US and dream of bigger things to come.