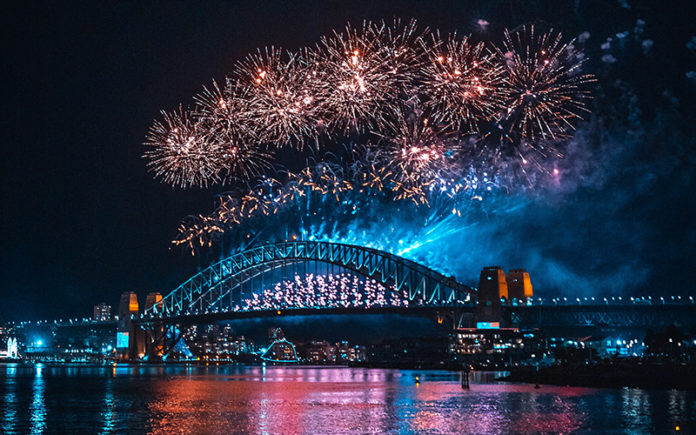 Sydney’s World Pride 2023 will be showcased tonight as part of the city’s iconic New Year’s Eve Fireworks display as the Progress Pride flag colours will be projected onto the Sydney Harbour Bridge.

As the clock ticks down to the New Year, Sydney is preparing for one of the world’s most extensive fireworks displays to ring in 2023. The celebration, which will take place around Sydney Harbour, aims to showcase diversity and inclusion.

“Sydney is back and ready to bring in the new year with a bang,” said Clover Moore, Lord Mayor of Sydney.

The evening will start with a smoking ceremony around the harbour, followed by a 9pm display featuring projections honouring the knowledge and resilience of Aboriginal people and pyrotechnics inspired by the sky, land, and sea. The display has been curated by First Nations artists Carmen Glynn-Braun and Dennis Golding, in collaboration with Gadigal artist Nadeena Dixon and Foti International Fireworks. The fireworks will accompany a bespoke soundtrack from artist Rowan Savage, and the 9pm celebrations will be closed out by a performance from Akala Newman and rapper Kobie Dee.

A special moment at 11pm will see the Progress Pride flag colours projected onto the Sydney Harbour Bridge, accompanied by a performance of “Somewhere Over the Rainbow” by Courtney Act on the ABC stage. This nod to the World Pride festival, which will take place in Sydney in February, adds a further element of inclusion to the celebration.

At midnight, the main event will begin with 2,000 fireworks launched from the sails of the Sydney Opera House and 7,000 effects fired from 184 positions on the Sydney Harbour Bridge. Four city rooftops will also be used as firing platforms, and the display will be set to an electronic soundtrack “Follow the Lights (NYE 22)” created specifically for the event by music producer Stace Cadet, featuring vocals by Stace Cadet and KLP. The midnight fireworks will conclude with a rainbow waterfall from the Sydney Harbour Bridge, surrounded by bursts of colour around the harbour.

If you’re unable to attend in person, the Sydney New Year’s Eve celebrations will be broadcast live on ABC TV in Australia at 8:30pm and streamed on the ABC website and ABC Iview. The 9pm and midnight fireworks will also be streamed and seen by billions worldwide.