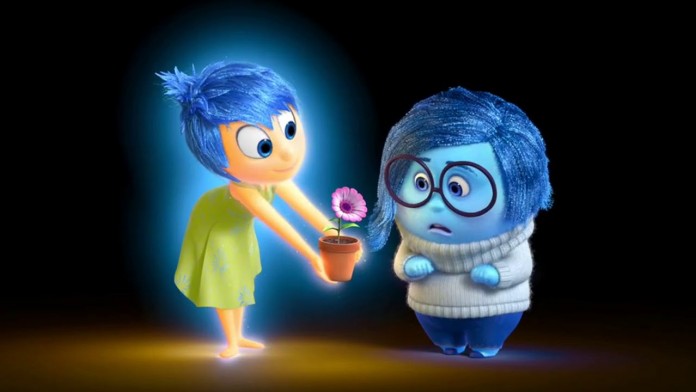 Do you remember the first movie that made you cry?

Was it the moment when Jack (Leonardo Dicaprio) let go of the wooden plank and fell to the depths of the Atlantic Ocean in Titanic with Rose (Kate Winslet) looking on?

Or was it the tear jerker that was Brokeback Mountain or the Notebook, which seemed to always grab the hardest man and shake him empty of tears?

Tears in movie cinemas are always hard to hide.

Yes its dark, but they always seem to happen close to the end of the flick and never give you enough time to discretely wipe away those few remaining tears before the credits roll, the light come on and your movie going buddy turns to look you right in the face and ask “Did you enjoy that?”

Well, I had one of those moments on Saturday. And it wasnt one of those long running tear jerkers like the
Notebook that had me. In fact this movie was full of laughs and had only one or two moments of shear sadness but it certainly grabbed me.

It was Inside Out, the new animated child-come-adult feature from Pixar – Disney starring Amy Poehler and
this was a thinking mans/womans movie. Some have suggested it was a movie about feelings, with feelings.

The film is set in the mind of a young girl, Riley Anderson (Kaitlyn Dias), where five personified emotions
—Joy (Amy Poehler), Anger (Lewis Black), Disgust (Mindy Kaling), Fear (Bill Hader), and Sadness (Phyllis
Smith)—try to lead her through life as she moves with her parents (Diane Lane and Kyle MacLachlan) to a new city.

Amy Poehler introduces Inside Out the new Pixar-Disney Movie

The movie deals with how these emotions change through life circumstances and each change creates memories whether they are standard memories or core memories and hows these can change your life.

The subject matter was particularly intricate, not so for the four year olds that were sitting close by who
could be heard (in the first few minutes) explaining in exact detail that each of the coloured marbles were
memories and that Joy was nice and Sadness was not.

Poehler’s character Joy, was as her name suggests, in charge of keeping Riley happy and she took charge to
coordinate the time and place for use of the other four emotions.

But in a twist, (resembling depression) Sadness starts to change gold-colored happy memories into blue-
colored sad ones, all of a sudden the mind world that had been created for Riley starts to come crashing
down and we are treated to an emotional roller-coaster both inside and outside of Riley’s mind.

Phyllis Smith talks about her role, Sadness, in Disney-Pixar’s Inside Out.

The moment that grabs most in the cinema, and you could clearly hear sobbing (not sure whether it was adults or children) was when Riley’s imaginary friend from years past Bing Bong (Richard Kind) selflessly assists Joy to get back to headquarters to rescue Riley’s emotions, leaving him to die in the memory dump.

He’s not a character we had known for long, or become greatly attached to, but I think its the fact we have
all had imaginary friends before and truly understand that they would do anything for us, even to the point
of sacrifice themselves. This, all, close to those credits rolling and the need to secretly wipe those tears
away.

Inside Out is great for the kids. Some really terrific characters and its so engaging those four year olds
never uttered a word from minute two until the end.

But for an adult audience this is one worth seeing. It makes you think, it makes you reflect and in some way
give you a lesson in depression and how it can just effect every other emotion for no reason other than it
can.

In its first week at the box office Inside Out grabbed $5.6 million in Australia and $363,000 in New Zealand
to be ranked third and second respectively.

As School holidays kick in this week the numbers are sure to rise.