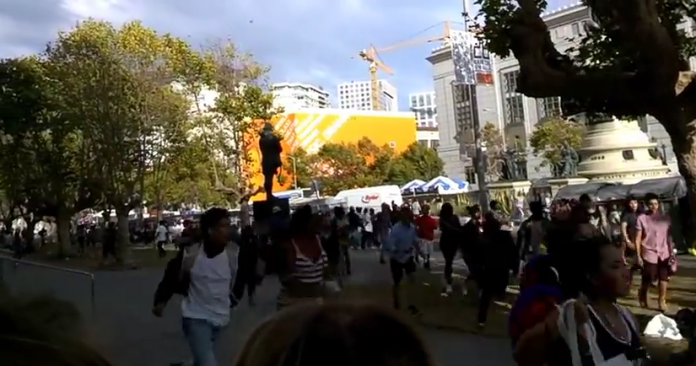 Attendees at San Francisco Pride had a scare as the crowded gay pride Pink Saturday celebrations came to a conclusion.

According to San Francisco (CBS SF) Police they responded to the scene after “shots rang out” at the Civic Centre Plaza at around 6pm on Saturday evening.

The extraordinary video below captured the crowds reaction to the shooting. (Shots are heard at 34seconds)

Police said the altercation was between two groups of teenagers, with six being detained, and one bystander wounded and taken to hospital.

The wounded bystander was a 64 year old man who was a vendor at one of the Pride Parade booths.

Police say that they are still not certain whether the shooting was gang related. The shooting is not thought to be in relation with the Pride Festival itself.

The Pride event at the Civic Centre Plaza was about to finish when the shooting occurred.

More than 1million people are expected to attend pride activities across the entire weekend in San Francisco.