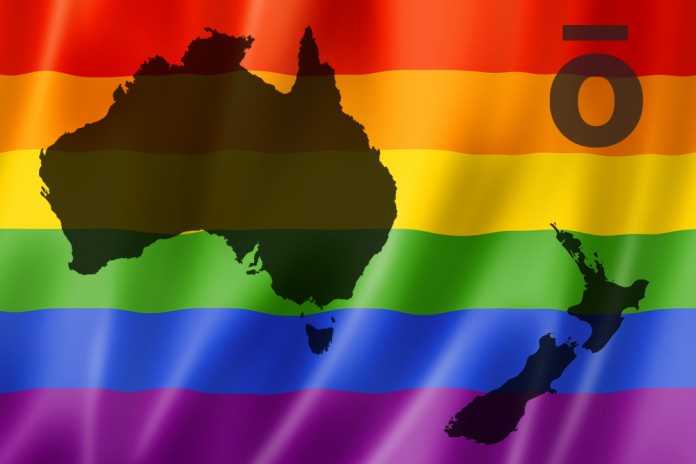 As 2015 comes to a close, it’s the perfect time to reflect on those that have made an impact this year either in their chosen field or in the community at large to advance the LGBT cause.

They may be gay, bisexual, lesbian, transgender or straight but they have all played a part in making 2015 better in Australia and New Zealand. The list isn’t exhaustive, we could have plucked names for days, but these are the most influential people that we have seen through Eikon this year.

Our first edition of the Eikonic Awards starts now.

Former National Rugby League (NRL) player for the Sydney Roosters, Casey Conway spoke out in October about being a gay, Aboriginal man in the world of professional sport.

During an interview with SBS, Conway explained that he had privately come out to club officials during his time in the NRL, however only came out to teammates after he left the Roosters. The former Roosters player said that he was leading a “double life,” hiding his sexuality from his teammates whilst sometimes trying to navigate the gay club scene in Sydney.

30-year-old Conway also works as a youth development coordinator for a small non-profit in Queensland and says he hopes to use his public profile as a platform in helping LGBTI youth.

With 2015 being 100 years since the Gallipoli landing, we were proud to acknowledge that  one of the founding members of Overwatch has received an Air Force Commendation for his work with the Defence Force’s LGBTI group.

Corporal Hemi Frires was recognised for consistently demonstrating the Defence Force values of courage, comradeship and commitment in his support of LGBTI peers, and their commanders, managers and families.

Coming out in the Defence Force was not an easy personal moment for Frires, who was the secretary at Overwatch, a support group for GLBTIQ (Gay, Lesbian, Bisexual, Transgender, Intersex and Questioning) personnel. But he said the Defence Force was supportive and he had always been treated just like anyone else.

The Commendation was awarded to Corporal Frires by the Chief of Air Force of the Royal New Zealand Air Force(RNZAF), Air Vice-Marshal Mike Yardley.

McGregor who is one of Australia’s most prominent transgender people is being honoured for her work as a champion for diversity, three years after she transitioned to being a woman and went public as the highest ranking military officer in the world who is transgender.

The Wellingtonian was presented with her award by the Queen at Buckingham Palace, for her devotion to supporting her peers in the gay, lesbian, bisexual and transgender communities.

Besley, 22, of Berhampore, is the only New Zealander to have received the award, which is a new honour given to just 60 young people worldwide for their devotion to Commonwealth values.

The charity was inspired by Besley’s positive experience of coming out as gay with the support of a similar group at Nayland College in Nelson.

Jason Ball became the first openly gay Aussie Rules player at any level in 2012 when he publicly announced his sexuality. Ball has since become something of a standard-bearer for the issue in sports, saying football players would still feel apprehension and fear at openly admitting their sexuality — just as he did — because he says the AFL has not yet made sufficient in-roads to making gay players feel comfortable and secure in the game.

Ball, who established a Pride Cup match between his local Melbourne football club Yarra Glen and Yarra Junction in 2014, was instrumental in the Australian Football League to create the “Pride Cup” match which was held in the 2015 AFL pre-season. It has since been announced that St Kilda and Sydney will play the AFL’s first pride match in round 21 next season as the football community takes an historic stance for equality, thanks to Ball.

Nikki Kaye is a proud supporter of the LGBT community in Auckland and has always worked to progress issues for the community.

She is a regular at LGBT events but, more importantly, fights hard for funding and this year as Youth Minister was able to provide more than $85,000 in funding to ensure support services for LGBTI youth.

Aussie musician and YouTube star Troye Sivan had an incredible year in 2015, with his second major EP Wild debuting at #1 on the ARIA charts and reaching #5 in the U.K. and U.S. His Blue Neighbourhood album has reached 6 in Australia, 7 in the US and 9 in New Zealand and it was only released three weeks ago.

Apart from his music and online pursuits, Sivan has been an outspoken voice around LGBT rights and particularly marriage equality in Australia.

What a year for World Cup Rugby International Referee Nigel Owens. Back in August, he officiated in Bledisloe Cup decider between the All Blacks, and the Wallabies and in the lead-up opened his heart to Paul Henry on his TV3 talk show about how he copes with heckling and his personal struggles growing up as a gay man, in the “heterosexual sport” of rugby.

Owens explained that back when he was 19 he attempted to take his own life. He left a note for his parents saying that he “wasn’t able to carry on in his life anymore”. Fortunately, Owens was found by the rescue helicopter and was taken to the local hospital.

We are so thankful that he was found because later in 2015 he won the plumb role of referee for the 2015 Rugby World Cup final in which the All Blacks had a record-breaking victory. Yes, he’s not Aussie or Kiwi but he certainly had a profound effect on our two countries this year.

He may not have got the ultimate result he wanted, but what Australian Federal MP Warren Entsch did was bring the marriage equality debate head. Not just in the parliament but in his own party room and forced a six-hour debate of the issues in the Liberal Party room.

A cross-party bill was introduced into the Australian Parliament and co-sponsor of the bill, the Liberal Party’s Warren Entsch, pushed for the ‘free-vote’ to be debated in the party room on a cold August day in Canberra.s the issue gained momentum the Prime Minister Tony Abbott declared they spend most of the afternoon and into the evening to debate the issue in an effort to clear the decks for the bill to be debated next week.

As the issue gained momentum, the then Prime Minister Tony Abbott declared they spend most of the afternoon and into the evening to debate the issue in an effort to clear the decks for the bill to be debated the next week. As the gay community held its breath, the vote to offer a ‘free vote’ was defeated and a plebiscite decided as the best way to resolve the issue.

It wasn’t the result Entsch wanted but if it wasn’t for his dogged determination and support for the LGBT community the issue may not have even got to this point.

At the end of 2014 New Zealand Olympic rower, Robbie Manson announced publicly that he was gay. It wasn’t something that he thought would be much of a big deal but it grabbed the nation and it soon became the story.

Fast forward to 2015, Manson has been training hard to score a berth in the 2016 Rio Olympic team and in the process has been opening up about how lucky he is to be in a position to help show younger gay athlete’s that sexuality doesn’t matter in sport.

Hopefully, it inspires others to come out and be themselves, or, at least, makes it easier for them, I think it’s like a domino effect; I’m just one domino in a much bigger picture.

Standards New Zealand published the first standard in the world that assists organisations to achieve a truly inclusive workplace and Michael Stevens has been at the forefront of this development.

Through his organisation Rainbow Tick, Stevens has developed a certification that demonstrates a business is an inclusive organisation for people who are lesbian, gay, bisexual, transgender, takatapui and intersex.

As well as achieving the NZS 8200 standard, in 2015 Rainbow Tick was able to announce that Fletcher Building as New Zealand’s first construction and building materials company to achieve Rainbow Tick certification.

Great effort by Michael and his team at Rainbow Tick.

2015 was a big year for one of Australia’s most loved sportsperson. Matthew Mitcham, who is well known for this Gold medal heroics at the Beijing Olympics and his battle with drugs and depression, this year dusted himself off and continued around the country performing in his cabaret show.

But it was his dancing that grabbed the spotlight, performing on the Network 7 show Dancing with the Stars and impressing everyone (He lost the final to Emma Freedman) with his talent but also his humour and above all representing the gay community in such a huge mainstream way.

It was a huge year for Matt Fistonich and it started in style with the announcement that he would represent New Zealand at the Mr Gay World competition in Capetown.

The Auckland resident did the country proud finishing in the Top 10 and then continued to represent the community during the year working with organisations such as LYC, New Zealand AIDS Foundation, GABA and Pink Shirt Day.

He was instrumental in promotions for ‘More than HIV’ for NZAF and the GLAADS ‘Spirit Day’ in the US. All of this while working within the industry to promote positive messages to the LGBT community across New Zealand, Australia and beyond and now conducting the competition to find the next Mr Gay New Zealand in 2016.

Aaron Fleming knows all about injury and illness after many years of dealing with both. Even in 2015, he dislocated his shoulder and yet still ten weeks later completed a half-ironman competition.

Always with the LGBT community in mind, Aaron is set to host an episode of the TVNZ shows Neighbourhood next year with an LGBT theme. He also put on a special night in Hamilton to raise money for the victims of the Nepal earthquake earlier in the year.

Never one to stay still for very long, 2016 will no doubt see more ironman competitions for Aaron and continued support for his community.