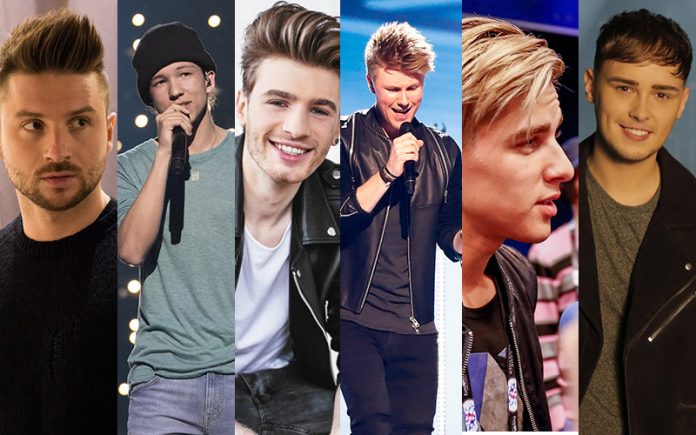 Eurovision 2016 is now less than a week away and the acts from across the globe are heading to Stockholm in Sweden to rehearse before the big week begins.

As avid Eurovision watchers over many years, we thought it might be a good idea to put an early list together of the hottest entrants from this year’s competition.

Early favourites in the singing competition are Russia, who features in our hottest list, but take a special look at the boys from Denmark, Great Britain and the young lad representing host country Sweden.

There’s something for everyone….enjoy our top 9 men across 6 acts.

Lighthouse X is a pop group with a mission: Making the world a slightly better place through the power of music. They will represent Denmark in the 2016 Eurovision Song Contest with the song Soldiers Of Love.

Lighthouse X consists of three artists who have come together in a strong fellowship. They believe it is possible to create a band that thinks differently. A band that takes social responsibility through music in a new and innovative way.

We just think they look incredibly hot together. Check out there little fashion piece to camera at the rehearsals yesterday.

Justs won the right to sing for Latvia in Stockholm after winning the Latvian national selection, Supernova, in February. The young and aspiring 21-year-old singer will be representing his home country at the 2016 Eurovision Song Contest with the song Heartbeat, written by last year’s Latvian Eurovision representative Aminata.

Interestingly this very cute Latvian star has teamed up with his friends and is in process of creating an APP that he himself describes as Tinder for musicians…..mmm mmm

Late on Wednesday afternoon, Donny Montell had his first rehearsal in Stockholm.

A blue light fills up the venue and Donny Montell starts right away with his choreography. He reaches his hand to the sky and continues with a spin. Much of his choreography is based on presence of the camera and this year Lithuania also splurges out with pyros during the act.

Donny Montell (Donatas Montvydas) is a Lithuanian singer and songwriter from Vilnius. He represented Lithuania at the 2012 Eurovision Song Contest in Azerbaijan. After being part of the Europe’s favourite TV show, the Lithuanian pop artist promised himself to return to the contest one more time.

He’s looking heaps better now, can he bring it on show night. He is up just before Dami Im from Australia in Semi Final 2.

Frans (17) became popular at age 7 with a song dedicated to the football player Zlatan Ibrahimovic and made an explosive comeback in this year’s Melodifestivalen, the Swedish national selection for the Eurovision Song Contest, with the song If I Were Sorry.

Frans performed the song for the very first time in Gävle during the fourth and last semi-final making it directly to the big final at the Friends Arena, Stockholm. The single was released immediately after the performance and ascended quickly in the charts.

The song is currently #1 on the Swedish Spotify charts, number 1 on the Swedish national single sales chart and the track has since been streamed more than 4 million times – this despite stiff competition from other strong Melodifestivalen contributions as well as world famous artists including Zayn and Rihanna.

Joe and Jake are a brand new musical duo whose debut track, You’re Not Alone, an anthemic pop song with a universal message, won the BBC national final, Eurovision: You Decide and will represent the United Kingdom at the 61st Eurovision Song Contest in Stockholm.

Joe Woolford, 21 from Ruthin in Wales and Jake Shakeshaft, 20 from Stoke-on-Trent in Staffordshire first met as fellow competitors on The Voice UK, where they quickly bonded over their love of music, followed by a shared love of peri-peri chicken and football.

Their catchy tune has to have them up there on the final night, but the UK rarely score high so fingers crossed.

Sergey Lazarev will represent Russia in the 2016 Eurovision Song Contest. He is famous for being a singer, actor, and TV presenter. Starting his music career at an early age and becoming more and more popular, he was followed by the whole country during whilst growing-up as an artist.

In 2015, he won all possible Russian music awards. The music of You Are The Only One, his song for Stockholm, was composed by true Eurovision legends, Dimitris Kontopoulos and Philip Kirkorov.

Russia is currently 9/4 favourites to win Eurovision. Sergey is sure to break hearts of girls and some men worldwide. And check out the cute back-up singer in the clip below, Russia has the goods.