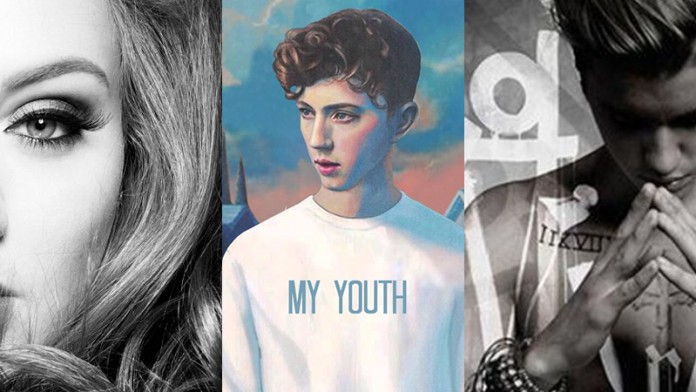 In the lead-up to Christmas there is usually a number of artists trying to get new music out into the charts so they can be part of that Christmas giving rush. But over the past few weeks there has been a musical avalanche from some of the industry’s biggest players.

There has been re-emergence of Adele following her enforced time away due to throat surgery, the dropping of possibly the last of the One Direction albums, now as a foursome, before they take time off in March and of course the eagerly awaited new album from Justin Bieber.

Eikon takes a look at some of the new music on offer.

Adele’s brand new album is called ’25’ and it’s officially got a release date of November 20 – set to launch after the huge success of the record’s lead single ‘Hello’.

There’d been a lot of rumours about the release of Adele’s third record over the past year, with fans eager to hear new music from the voice behind such huge hits like ‘Someone Like You’, ‘Rolling In The Deep’ and ‘Chasing Pavements’.

The music video for ‘Hello’, which showcases Adele at her very best, broke the VEVO record for the most views in 24 hours by racking up 27,717,681 hits on its first day alone!

When One Direction announced that they had decided to take a break next March to explore solo careers the internet went into meltdown.

The X Factor made band had already lost one of the original five, Zayn Malik in March 2015 and it seemed this year was turning into an “Annus horribilis” with the break-up announcement. So what did the number one boy band in the world do? They went back into studio and pumped out an album that moves a long way away from their original pop roots…. and they’ve nailed it.

Dropping the same day as Bieber’s “Purpose” was an interesting marketing ploy but it will surely pay off. The first two singles of the album, Drag Me Down and Perfect have hit the tops of the charts and the album, which has a deeper, almost Oasis feel about it, is set to do the same.

Troye Sivan, the South African born Australian youtuber/pop star was recently declared by Billboard magazine one of the hottest artists in the world under 21.

Last month, Sivan wrapped up his three-part video narrative for Blue Neighbourhood with “Talk Me Down,” and the world declared Sivan and made the progression from YouTube star to true musician.

Part of that progression was a short Australian tour he had planned to finally sing live for the first time to a local audience. Unfortunately Sivan had to cancel his two most important Australian shows, including Sydney on Thursday night, due to illness.

On Friday he debuted the next single “Youth” which will form part of his first studio Album to be released on December 4.

The three-minute track is a bombastic love song that is reminiscent of Lorde in its verses and Ellie Goulding in its chorus, yet remains undeniably Sivan through and through. Like “Wild” before it, “Youth” finds Sivan basking in the unbridled joy of being with the one he loves, a joy that he manages to convey in a genuinely appealing way.

At the same time One Direction dropped ‘Made in the AM’, Justin Bieber released his first studio album in three years called ‘Purpose’.

At first listen you can get the pop catchy tunes of ‘What do you mean’ and ‘Sorry’ and you think he’s at least hit the mark in terms of mainstream. But digging a bit deeper and you find out Purpose is all about apologising for the past, for all of his mistakes and declaring his love, not for Selena Gomez but his newly found faith.

It’s a strong album that actually may not appeal to his beliebers at first listen but sets the foundation to make the most of his newly reformed career.