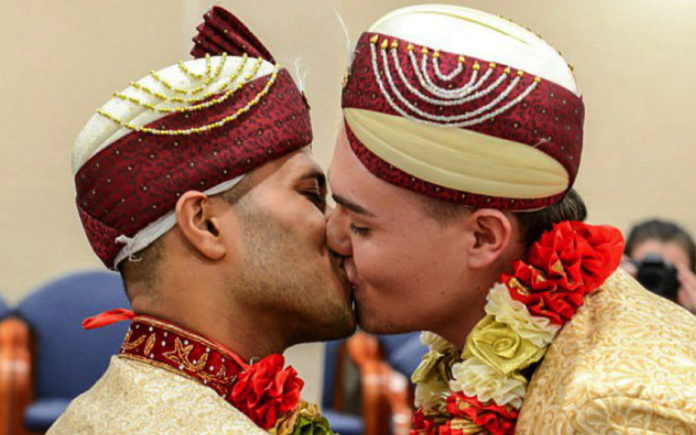 Tying the Knot in Walsall, dressed in traditional Islamic wedding attire, two men have arguably become the first to have a same-sex Muslim wedding in the United Kingdom.

Newlyweds, 24-year-old Jahed Choudhury and 19-year-old Sean Rogan say they decided to show the world you can be gay, you can be Muslim, and you can be in love.

Prior to the civil ceremony, Choudhury explains how he faced homophobia on a daily basis, having been bullied in his school years, along with isolation from his family.

“People would spit on me, empty the rubbish bins on me, call me ‘pig’ and the Muslim people would shout ‘Harum’ – which is a very nasty insult in my language.”

During his teen years, Choudhury was assaulted, banned from attending his local mosque, and was repeatedly told his sexuality was “just a phase.”

In desperation and after attempted dangerous “gay cure” therapy, and attending religious pilgrimages to Saudi Arabia and Bangladesh, Choudhury attempted to take his own life.

Then he met Rogan and everything changed.

“I was crying on a bench and Sean came over and asked if I was okay. He gave me hope at one of my lowest points and he’s stood by me all the way,” Choudhury told Gay Star News.

The pair decided to move in together in 2015 and Choudhury proposed to Rogan on his birthday in June 2016.

The couple officially married on the 22nd of June 2017 and went to Spain for their honeymoon.

Choudhury says that despite many of his family not attending the wedding as they still believe he is “sick,” he couldn’t be happier.

While the wedding is believed to be a first in the United Kingdom, The Office of National Statistics said that the religion of spouses is not routinely recorded at civil ceremonies, so it would be impossible to confirm 100% that the couple have made history.

Much like the Church of England, the Muslim Council of Britain remains opposed to same-sex marriage.