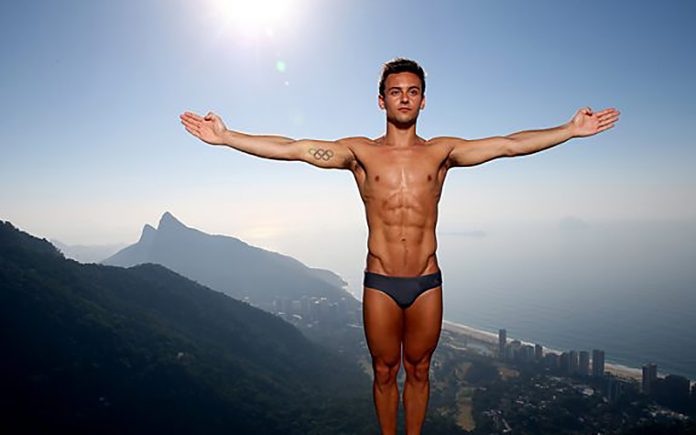 Arguably the world’s most well-known openly gay athlete, Tom Daley failed to improve on his two bronze medals competing in the semi-finals of the 10-metre platform event at the Rio Olympics where he placed last.

The 22-year-old secured bronze in the same event at the 2012 London Olympics and following preliminaries was ranked number one heading into the semi-finals.

His failed attempt followed grabbing the bronze with teammate Daniel Goodfellow in the 10m Synchro event on the first few days of the games.

There are 44 openly gay athletes at the Rio Olympics and 8 of them are in the Great Britain team.

Daley came out as gay via a youtube video in December 2013 and soon after moved into a relationship with the 42-year-old Hollywood Screenwriter Dustin Lance Black.

The two have become the gay power couple across the Rio games amid controversy when commentators for USA broadcaster NBC failed to mention or acknowledge the relationship between Daley and Black.

A swarm of criticism was labelled at the network on twitter claiming if they were a straight couple they would have been lauded but in this case neither were even mentioned that they were gay.

A spokesperson said,”With more than 11,000 athletes at the Games, it isn’t always possible to identify every competitor’s significant other, regardless of their sexual orientation.”

When asked about the controversy Black told The Advocate from Rio de Janeiro that while it might have been “curious” for NBC to pass over Daley’s significance, he hasn’t been able to watch any of the coverage himself.

“I haven’t watched any of NBC’s coverage, so it’s tough to make an informed comment,” he said. “I’m here to support Tom and his family here in Rio. Period.”

“When an openly LGBT person achieves,” he said, “it tells young LGBT people that their dreams are not limited by who they are or who they love.”

Following his synchro win, Daley claimed his relationship with Black has helped him become a better diver.

“The one good thing is he is at the top end of his field,” he said to The Evening Standard.

“He’s the best at what he does and he gets it.

“Having someone that understands, that has taken off a massive amount of pressure.”

After winning his bronze, Daley decided to move out of the athletes’ village for a few days to give himself a rest before the start of the individual competition.

“It’s not just me that’s worked so hard over the years to get to where I am, it’s everyone that is behind that driving force to get me at my physical and mental peak. Although it’s an individual sport, it’s a team effort.”

Daley’s Team GB has had a great fortnight in the diving pool following Jack Laugher winning silver in the 3-metre springboard event and teaming with Chris Mears to win Gold in the 3 metre Synchro event.