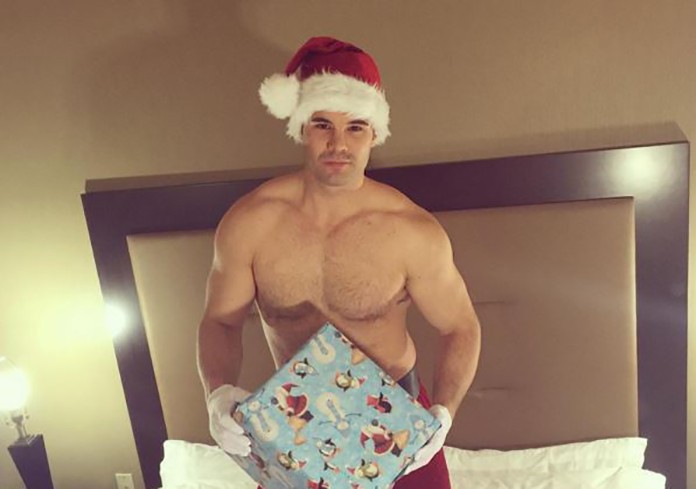 Christmas is the time of year to celebrate and indulge in food, fun and a little bit of extra Christmas cheer. As this is Eikon’s first year we thought it only fair to follow traditions of Christmas’ past and give our readers some extra eye candy before the big day arrives in our 12 Gays of Christmas.

We have taken you from Gay 1 Gus Kenworthy right through until Gay 11 which was our very own Matt Fistonich.

Today as well as giving you the entire list we also present Gay number 12. And it’s only fitting that he’s an Australian, that we have featured him on Eikon and that he loves slapping on a Santa outfit.

Simon Dunn has had an amazing year. Not only is he in the Australian Bobsleigh team, he plays rugby for the Sydney Convicts and he’s even got his own Youtube Channel.

In 2015, he was also named as top of the 100 Attitude Magazine Hot 100 knocking off some of the biggest names in the gay world.

To celebrate Christmas, Simon has put together a cheeky snow covered Christmas video, lip-syncing (Badly) to Mariah Carey’s classic. Merry Christmas Simon from all of us here at Eikon.

What a crazy big year for Matt who was recognised as one of New Zealand’s most influential young New Zealanders and finished in the top 10 of the 2015 Mr Gay World competition in South Africa.

Matt has thrown himself into working with the LYC team and the New Zealand AIDS Foundation campaigns to encourage awareness around safe sex and HIV…..read more

Tomi Lappi burst onto our computer screens in 2015 when he won his way into representing Finland in the Mr Gay World competition held in Capetown.

The stunning model and dancer had been forging a trail in London and Europe in the last few years with performances and model shoots, but it was the Mr Gay World comp that pushed him to prominence….read more

Davey Wavey had to be included in our 12 Gays of Christmas just due to his incredible happiness and joyfulness at this busy Christmas time.

The Canadian has also had a stellar year with his Youtube Channels growing, releasing a new inclusive underwear range and finding the love of his life….read more

Current Mr. Gay World Mass Luciano has had a whirlwind 2015. He started the year as one of the red-hot favourites to win the 2015 Mr Gay World competition.

Once bullied in a Puerto Rican High School for being gay, the Mr Gay Hong Kong winner was originally named first runner-up in the Mr Gay World final in Capetown but then last month was awarded the title after the initial winner Klaus Burkart resigned his title…..read more

Lambert rose to fame in 2009 following his time on the eighth season of American Idol where he finished runner-up. Later that year, he released his debut album, For Your Entertainment, which debuted at number three on the U.S Billboard 200….read more

Never one to be a shy violet, especially at Christmas, former Mr Gay World Stuart Hatton continues to make a mark in whatever charity or cause he decides to tackle.

Whether it’s to encourage men to test for testicular cancer by saying “balls to cancer” or anti bullying and homophobia awareness campaign, ‘So What?’ or encouraging gender equality in his own sport of dancing, one could say Mr Hatton has had a busy and stellar year…..read more

2015 started so well for Neil Patrick Harris. He had just finished his long role as Barney in How I Met Your Mother and then had the plum role of hosting the Academy Awards, the first openly gay male to host the awards and where he even got to appear on stage in nothing other than his undies.

Although some of the critics thought his hosting was below par, his star still rose and in September when NBC commissioned a brand new Live TV show called Best Time Ever with Neil Patrick Harris which saw him standing on a stage in New York and hosting a variety show each week…..read more

Joey Graceffa came out publicly on his Youtube Channel this year and almost broke the internet. Nothing like producing a music clip and having your boyfriend as the supporting actor to announce to the world something we all thought we knew.

Joey has also seen lots of changes going on with moving house a few times, he released his first novel and it made the New York Best Sellers list and his Youtube Channel has gone from strength to strength reaching the famous 5 million subscriber mark in 2015…..read more

Tom Daley has had a massive year following up his coming out in 2013 and then his relationship with Dustin Lance Black.

This year he followed up with more diving medals, a gold and a bronze at the World Championships in Russia…..read more

Sam Smith is like the consummate Christmas professional, wherever there is a chance to sing a ballad or a carol he will be there. But he actually hates Christmas songs.

The four-time Grammy Award winner (all this year), said in 2014 interview, as he released a Christmas song, that he really didn’t like them much at all…..read more

It’s been a very big year for Gus Kenworthy so what perfect time for him to celebrate than at Christmas which is why he leads off our 12 gays of Christmas.

The American freestyle skier from Telluride, Colorado, said he was never able to be proud of his Olympic silver medal in the 2014 Sochi Russian Winter Olympics, as nobody was aware that he was gay….read more