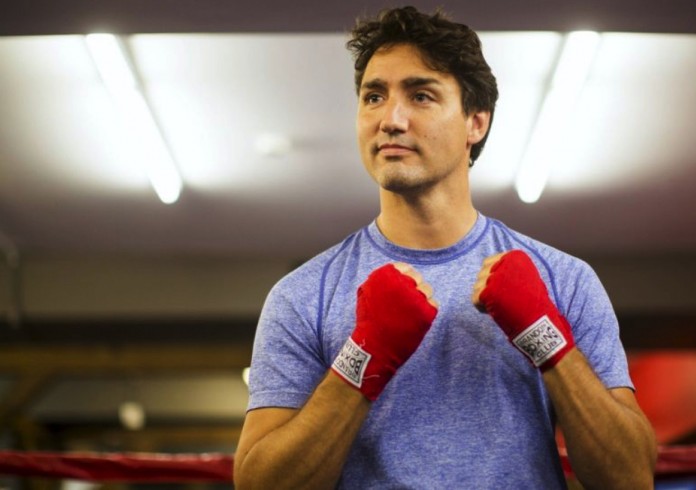 43-year-old Justin Trudeau is the second youngest leader in Canada’s history after his Liberal Party won 54% of the seats in parliament on Monday (19 October 2015).

Justin who is the son of former PM Pierre Trudeau is a passionate advocate for LGBTI rights.

Justin has said that gay marriage, abortion and legalising marijuana were his “core principles.”

Eikon has managed to scrape together a little list showing the top 7 reasons to love Canadian Prime Minister Justin Trudeau.

In 2012, Justin Trudeau brawled his way to victory over Canadian Conservative Sen. Patrick Brazeau in a charity boxing match.

6. He sports a tattoo

Justin is potentially the first Canadian Prime Minister with a tattoo, originally a small depiction of Earth, which he had done when he was 23, Justin has since surrounded this with a raven drawn into the style of the Pacific Northwestern Haida peoples.

5. He scrubs up well

Before becoming a lawmaker Justin has tried his hand at several professions including teaching, engineering, bungee-jump coaching and environmental geography. After all that he still scrubs up pretty good.

Justin raised $1,900 performing a partial striptease at a charity event in 2011. He stripped to his white tank top to raise money for liver disease research at the What a Girl Wants gala.

The Canadian PM knows how to work a scarf in the colder months.

2. He was attacked for being ‘too good looking’

Haters gonna hate … Justin’s opposition used slogans such as “Not A Model PM” during his campaign, possibly implying that he could just be a pretty face.

Justin attends Pride parades “whenever possible” and is also the first Canadian Prime Minister to have marched in one. He has also vowed to appoint more LGBTI people to government.