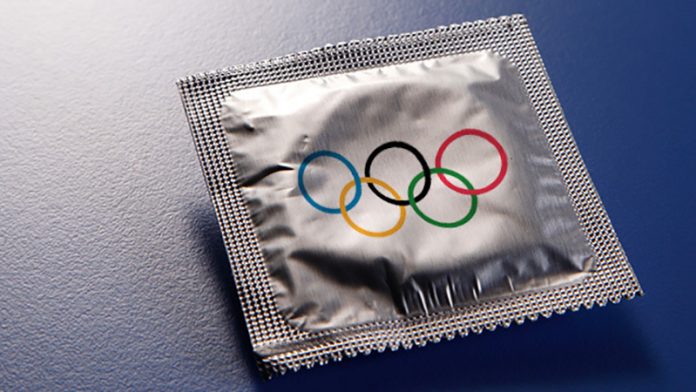 At the London Olympics, within hours of the first athletes arriving in the city, the gay dating app Grindr crashed.

It took them 24 hours to get the servers back up and running with enough bandwidth to help satisfy the demand of athletes in the village looking for their hottest hookup.

This coincided with more than 150,000 condoms being delivered to the village to satisfy the demands of both straight and gay athletes.

It has now been announced that the IOC has order 450,000 condoms for the Rio Olympic Games to satisfy the sexual activity that will occur before and after the athletes compete.

It was discussed very early on that because of the amazing venue in Rio, the beaches, and the nightlife, athletes attending the games this year will have an amazing time.

It is also expected they will meet and hook up with many of the locals. Match them with the athletic sculptured bodies from around the world and the village looks set to be renamed The Brothel.

“This is considered sufficient to encourage athletes to practice safe sex while in Brazil for the Olympic Games,” the IOC told Folha.

Recognizing the basic forces of nature, officials began passing out free condoms at Seoul in 1988. (Apparently, nobody had high expectations: that number was only 8,500.)

But things heated up over the next several games: In Sydney in 2000, officials had to scramble to add 20,000 condoms to the 70,000 that ran out midway through the Games.

This time, it seems, the IOC is taking no chances. The mosquito-borne Zika virus, an epidemic in Brazil, can cause mild flu-like symptoms among healthy adults.

But its effects on the fetuses of women who contract the virus in early pregnancy can be devastating.

Many babies exposed to the virus in utero are born with microcephaly, or abnormally small heads, as well as some developmental delays.

The Australian team is coming especially prepared: the Aussies will be armed with special antiviral condoms that may provide extra protection against Zika.

Scientists have confirmed that Zika can be sexually transmitted. It is unclear how long people infected by the virus remain contagious, but it appears to be at least several weeks.

Let’s hope along with the increase in condoms the owners of all the gap hook-up apps in the world lift their server power so that no one misses out on that gay hook-up experience come August 5.