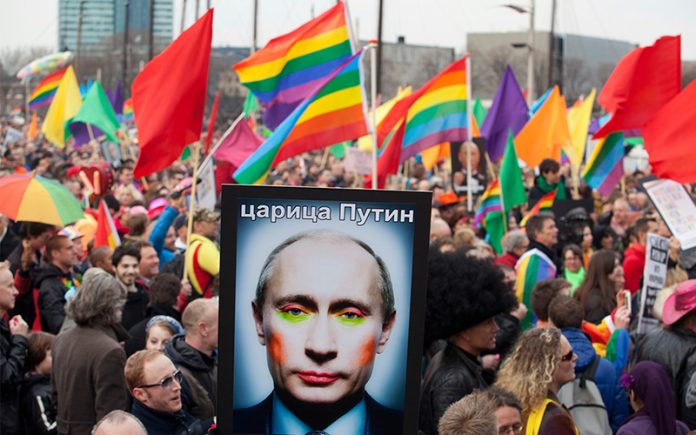 An American pastor has been ejected from Russia after he was arrested ad accused of planning to perform a same-sex marriage in the country.

Pastor Jim Mulcahy was sitting with Russian friends and discussing Roman mosaics when the Russian Police burst in and arrested him. He was ordered to leave the country hours later.

The 72-year-old Mulcahy, originally from Boston, spoke with the Associated Press about the nervous hours in the Samara police station a strong resolve.

“I wasn’t afraid; I felt like this was something I had to endure,” he told The Associated Press by telephone from his home in Kryvyi Rih, Ukraine.

Mulcahy is Eastern Europe coordinator for the U.S.-based Metropolitan Community Churches denomination, which has a strong outreach to the LGBT community. The church performed the first gay marriage in the United States.

He says his denomination does not perform or advocate for same-sex marriages as part of its work in Europe and insists he had no intention of carrying out a gay marriage in Russia.

Although homosexuality is no longer criminalized as it was in the Soviet Union, Russia in 2013 banned the spread of “propaganda” about non-traditional sexual relations to minors.

In Samara, Mulcahy said, a group of about a dozen people had just settled around a long table when four uniformed police knocked on the door. They claimed they had received a tip that Mulcahy was performing a gay marriage.

One officer took a teacup from Mulcahy’s hand and told him he had to come with them.

The officers drove Mulcahy to a police station — threatening to handcuff him if he refused to cooperate.

Police interrogated Mulcahy through an interpreter, who he says spoke limited English. Mulcahy’s lawyer, who was denied entry, waited outside. Police refused to let Mulcahy — who is diabetic and has prostate cancer — return to his hotel to take his medication during the eight hours that they detained him.

Mulcahy was then taken to court, where a judge ruled that he violated the terms of his tourist visa by engaging in unspecified religious activity. He had to pay a $30 fine and was given five days to leave the country.

The attention motivated Avers activists to install additional locks and an alarm system in their office. They fear that incidents like these will suppress the freedom of LGBT groups in Russia.

“We’re worried because LGBT organizations are getting labeled as foreign agents or even physically attacked,” said Avers spokesperson Vera Bochkareva. “Groups like ours are in a relationship crisis with the authorities.”

From his home in Ukraine, Mulcahy has appealed the judge’s decision. He said he has made many friends among the LGBT community in Russia and wants to return to visit them again as a tourist.

“I grew up during the Cold War believing Russia was a cold, gloomy place,” Mulcahy said, “but the hospitality of the Russian people changed my opinion once I visited the country.”