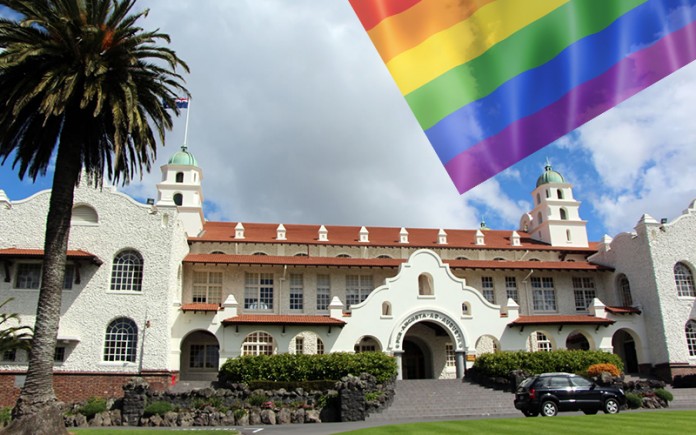 An Auckland Secondary school is currently in crisis mode following a blog set up by former students claiming the school is full of homophobia and students are unable to feel comfortable with their sexuality and/or gender-identity out of fear of discrimination.

The esteemed Auckland Grammar has had to reassure the school’s community that work is being done to provide more support for gay, bisexual and transgender students.

In a statement, School Headmaster Tim O’Connor Headmaster acknowledged it was a “core responsibility” of the school to “promote attitudes and behaviour in its students that reflect the school’s values”.

This included “teaching young men sensitivity towards and acceptance of the rights of others in our diverse society”.

But he has stopped short of claiming there is a problem only that they will work with students to effect change.

All of this is in response to the ‘Grammar Pride‘ blog, set-up by former students Henry Yuen and Joel Bateman – who graduated in 2012.

On their blog they explain that they have created the GrammarPride blog to encourage current and former pupils to share their experiences of what life was like for LGBTQIA students at the school.

On Friday, the website had received over 7000 views and the founders said they were “simply blown away by how much support GrammarPride has drawn from around the world”.

On the opening page of the blog, the founders lead the way outlining their experiences of attending Auckland Grammar.

Joel Bateman, who was Head Prefect in 2012 explains he, “benefited greatly from being in a competitive environment which valued academic rigor and sporting success, and was even fortunate enough to be appointed Head Prefect in my seventh form year.”

“Outwardly, I gave the appearance of an enthusiastic, untroubled and motivated boy as I aspired to become what I assumed the ideal ‘Grammar man’ was.

“But while I enjoyed being ostensibly successful, I can’t describe how damaging it was to strive within the confines of the systemically heteronormative ‘Grammar way’, and how much this struggle was worsened by the attitude towards the LGBTQIA community at Grammar.

Bateman continued, “During my tenure, Grammar failed to either acknowledge or support its LGBTQIA community, fostering a culture of animosity towards anyone who strays from what is considered to be the ‘normal’ sexuality.

“The word ‘gay’ was constantly used in a derogatory manner and ‘faggot’ or ‘homo’ were completely socially acceptable teases.”

Bateman has now gone onto to study at Harvard Univeristy in the US and now enjoys the freedom of being able to be himself in a welcoming environment whether thats at University or back home in Auckland with his friends.

“At Harvard, and when I return to visit my Grammar friends who are now at university, my sexuality is a very small component of my identity.

“I’m not surrounded by homophobia and I’m so much happier and less stressed, and I wish I could have been out and felt the same way while I was at Grammar.”

There are currently 12 former or current student stories on the Grammar Pride website and this is no doubt going to grow given the mainstream publicity this story is creating in New Zealand.

On the website, the founders claim the site will serve as an open forum for all former students.

“We hope that GrammarPride will be the first of many steps in bringing about change – the administration has already started working to address such issues and we hope to work in conjunction with them to promote this change.”

“This website will function as an open forum for students and Old Boys to share their experiences (anonymously if they would prefer) to both provide support to current LGBTQIA students, and to promote allyship among the rest of the student body.”

Headmaster O’Connor has said a student-led Social Awareness Committee had initiated discussions with Bateman in September last year over ways to address the issues, and a proposal developed by the committee would be discussed by the school’s leadership team at the beginning of the school year.

The school said it was working to “build a culture of zero tolerance of bullying and harassment”.

If you wish to read the stories and find out more about Grammar pride visit the website here.