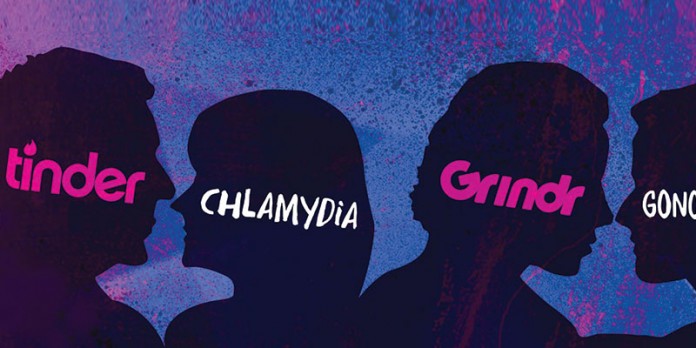 The billboard features silhouettes of people with the words “Tinder, Chlamydia, Grindr, Gonorrhea” on their head and have been placed across Los Angeles, one situated on the very busy La Brea Avenue, a few blocks from Tinder’s Beverly Boulevard headquarters.

The AIDS Healthcare Foundation targets Tinder and Grindr in billboards and bus benches that are aimed at reminding users about the risks of casual sex and offering free STD tests.

“In many ways, location-based mobile dating apps are becoming a digital bathhouse for millennials wherein the next sexual encounter can literally be just be a few feet away — as well as the next STD,” Whitney Engeran-Cordova, senior public health director for the foundation, said in a statement.

Reaction from the dating apps was swift.

Within two hours of the first billboard going up, Grindr pulled commercials that the foundation pays for on the dating site to promote free STD testing, the foundation said.

In less than 24 hours, Tinder sent a cease and desist letter claiming the campaign falsely associates the dating app with the spread of venereal diseases.

“These unprovoked and wholly unsubstantiated accusations are made to irreparably damage Tinder’s reputation in an attempt to encourage others to take an HIV test offered by your organization,” a lawyer for Tinder wrote.

The foundation sent a letter to Tinder denying that it disparaged the company and saying it would not remove the reference to the app.

The campaign is intended to draw attention to rising STD rates that the foundation said coincides with the popularity of the sites that make hook-ups easier, said Michael Weinstein, the foundation’s president.

“It’s logical, if you can be hooked up with someone in an urban area within minutes,” he said, “of course you’re going to have more exposure to STDs.”

The signs are currently on a dozen billboards in Los Angeles and 45 bus benches, Weinstein said.

The Los Angeles-based foundation, which provides health care to HIV and AIDS patients and free sexual disease testing, plans to also put them up in New York City, Miami and Fort Lauderdale, Florida.