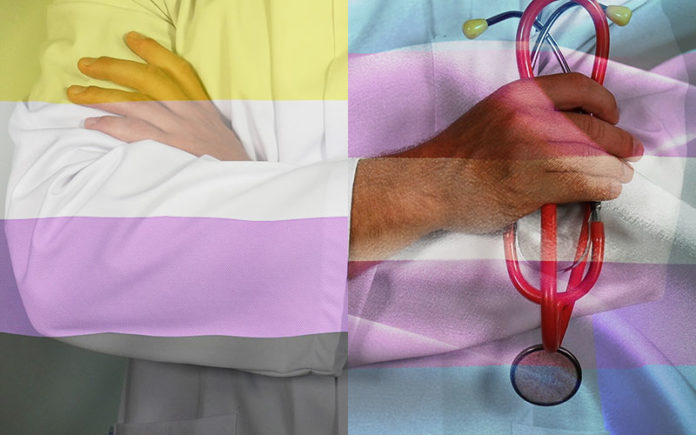 Doctors in Britain have taken the positive step of allowing transgender and non-binary people the right to self-identify.

Currently, any individual who wishes to amend their legal gender identity in the UK has to be diagnosed with gender dysphoria by a doctor which unfortunately perpetuates the idea that transgender or non-binary people suffer from a mental health condition.

Following the British Medical Association’s (BMA) annual conference this week, Doctors said that under-18s should be allowed to access healthcare and that trans people should be able to receive healthcare in settings appropriate to their gender.

Grace Allport from BMA northwest regional council said it was important to remember that transgender people were not only our patients but also colleagues.

“That’s why it’s so disappointing to hear the statements and leaks coming from the Government, threatening to row back the rights of transgender people and to deny healthcare to under-18s who experience gender dysphoria,” Dr Allport said.

“It’s important for us to pass this motion now to protect the rights of transgender and non-binary people.”

Dr Allport said the Government had repeatedly ‘kicked the can down the road’ in the two years since opening consultation on the Gender Recognition Act, despite overwhelming support for self-identification of gender.

“This process currently requires doctors to determine whether somebody’s transition is “valid”, requiring them to produce lengthy and costly reports about the life and medical history of transgender people to be sent off to an opaque committee which never meets the individual in person. As doctors, we should take no part in such a process.’

Dr Allport said that countries such as Ireland, Norway, Argentina and Portugal already allow identification on the basis of sworn, witnessed statements and that this was working well.

Dr Allport also said the Government was planning to ban puberty-blockers and hormones for under-18s with gender dysphoria.

“These medications are used off-label, which is not uncommon in under-18s.”

But Angela Dixon, a GP from Scotland, told the meeting that while all transgender people should be able to access healthcare and live their lives with dignity, the BMA should not be supporting medical interventions for gender dysphoric children, saying they were, “far from evidence-based. Nor should the BMA be supporting legal changes that conflict with women’s sex-based rights,” she said.

“If the BMA is saying that trans women should be treated as women on the basis of self-ID, it impinges on provisions to ensure that women can access healthcare safely and with dignity.”

Dr Dixon said the treatment of children and young people with gender dysphoria was ‘a matter of debate’ but that puberty blockers and hormone treatment could cause irreversible changes to the body, including infertility.

Some people who transitioned later regretted it, she added.

“Trans people deserve safe and effective healthcare, and this is what the BMA should be calling for,” Dr Dixon said.

Meanwhile, 136 companies – including BP, Disney, Google and Microsoft – have signed a public statement supporting trans equality in the UK. They’ve called on the government to protect trans people’s rights and reform the Gender Recognition Act to make it easier for them to legally change their gender.