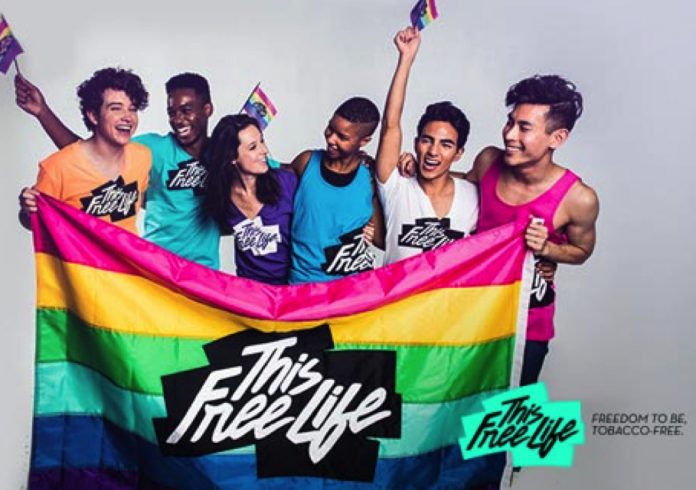 A new $35.7 million public education campaign has been launched by the U.S. Food and Drug Administration (FDA) to help reduce and prevent tobacco use among LGBTI youth.

The “This Free Life” campaign, which is the largest LGBTI-specific campaign conducted by the FDA targets the more than 800,000 young LGBTI people who are currently hooked on the habit.

With tens of thousands of LGBTI people die as a result of tobacco use, the FDA is specifically targeting “social” smokers between the ages of 18 and 24 in an attempt to prevent tobacco-related disease in the future.

Director of the FDA’s Center for Tobacco Products, Mitch Zeller, says “we know LGBT young adults in this country are nearly twice as likely to use tobacco as other young adults,”

“We want LGBT young adults to know that there is no safe amount of smoking. Even an occasional cigarette can have serious health implications and lead to addiction.”

According to FDA reports the coming out process faced by LGBTI youth puts them in a “unique tobacco-use risk factor” predominantly due to anxiety and discrimination that they may face.

The report also states that in conjunction with anxiety and discrimination caused by the coming-out process, many young LGBTI people find a “sense of community at LGBT bars and clubs,” which can often create an environment that encourages tobacco use.

The FDA says that as a result of LGBTI youth often being swayed by influencers, such as YouTubers, who “promote tobacco use, the campaign features YouTubers, such as Ingrid Nilsen, in one of the anti-smoking campaign videos for “This Free Life.”

“‘This Free Life’ is designed to challenge the perception that tobacco use is a necessary part of LGBT culture,” says Richard Wolitski, acting director of Health and Human Services’ Office for HIV/AIDS and Infectious Disease Policy.

“The campaign shows LGBT young adults they can be the person they want to be and still live tobacco free.”