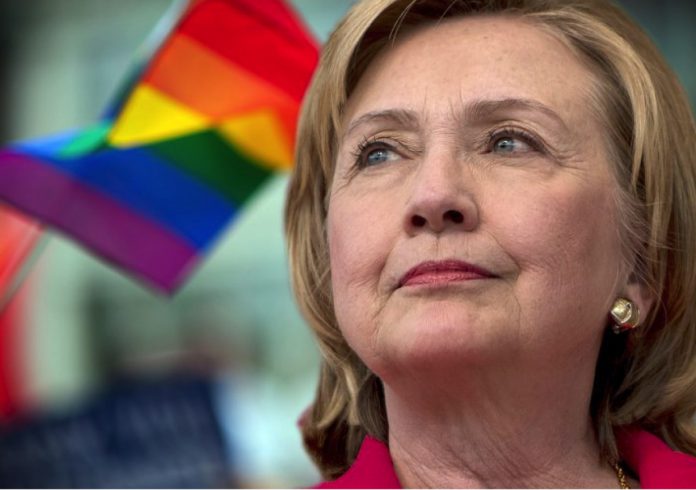 United States Presidential hopeful Hillary Clinton has taken her campaign to a Florida gay bar, just days out from the US Presidential election on the 8th of November 2016.

Hosted by the AIDS Healthcare Foundation, Hotspots Media Group, and the Human Rights Campaign, Clinton spoke at Wilton Manors, a bar in Southern Florida that is well known as an enclave for the Floridian LGBT community.

“Donald Trump has a terrible record on LGBT rights,” Clinton stated to the large crowd in attendance, highlighting the contrast between herself and her opponent Donald Trump.

“This election will determine whether we continue the progress we’ve made or let it be ripped away. We know Trump has promised he’ll appoint Supreme Court justices who will overturn marriage equality. And he will repeal President Obama’s executive actions to protect LGBT people from discrimination.”

Clinton also used the opportunity to outline her commitments to the LGBTI community, which includes outlawing the controversial conversion therapies being utilised in the United States and her plan to stop the spread of HIV, once and for all.

“LGBT kids don’t need to be cured of anything. They just need to be accepted, embraced and respected.” Clinton explained.

“We’ll work together to the AIDS-free generation that is within our reach. And we will talk on homelessness, bullying, and violence, particularly youth homelessness, which disproportionately hurts LGBT kids.”

With The Manor Complex being just three hours away from Pulse, the Orlando gay bar where 49 people were horrifically killed in June following an attack from a lone gunman, the location of Clinton’s speech was no coincidence.

Clinton also addressed the need to end the United States gun culture and the nation’s atrocious record of mass shootings.

“We’re gonna bring people together to reform gun laws and keep guns from falling into the wrong hands so what happened in Orlando can never happen again,” the Democratic candidate said.

With Mike Pence who is Trump’s vice-presidential pick, signing a anti-LGBTI bill into law allowing businesses to openly discriminate against LGBT customers in the state of Indiana, and the Human Rights Campaign estimating that over 200 anti-LGBTI bills were introduced to state legislatures, Clinton says “I have been fighting for families and the underdog my entire life, I’m not stopping now. We are just getting warmed up.”

According to recent polls, Clinton currently leads Trump in Florida by just a fraction of a percentage.