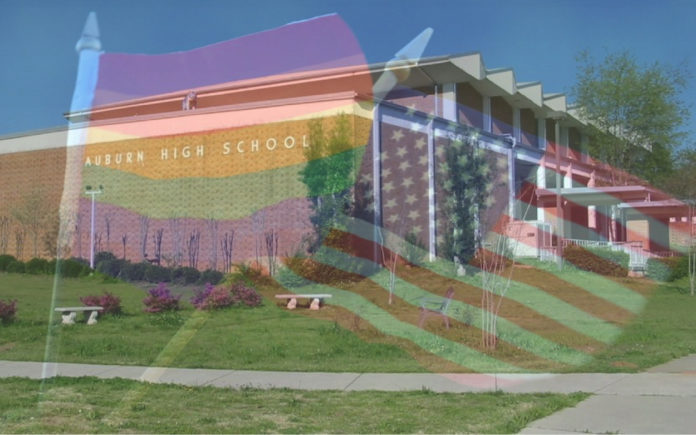 Auburn High School, in the US State of Alabama, has found itself caught up in controversy following the display of a rainbow flag that promotes diversity and acceptance.

The flag which was displayed during a school fair for Auburn High’s EDUCATE club, an extracurricular activity which promotes diversity and acceptance amongst fellow students.

However, the flag which was created by Auburn High’s EDUCATE club has seen parents of students at the school speak out, and even create an online petition to have the flag removed.

According to the petition which has mustered 714 supporters to date, the “controversial” flag which is currently on display in a classroom,” creates a hostile and provocative learning environment.”

The petition also argues that it is “unprofessional and distracting for a teacher to be so openly displaying their political views in an unbiased and socially neutral public setting,” and asks the school’s principal to consider the “uproar and chaos” that would ensue if a teacher was to hang a “Confederate, Christian, or Heterosexual Flag in their classroom.”

In response to the vocal minority who have since set their sights on the school and their EDUCATE club, supporters have since set up a petition of their own, protesting the removal of the flag.

The counter-petition which has gained over 5900 supporters to date argues that “to suggest individuals be isolated from differing political views is an absurdity” and “attempting to insulate a student from political discourse would be an insult to their intelligence.”