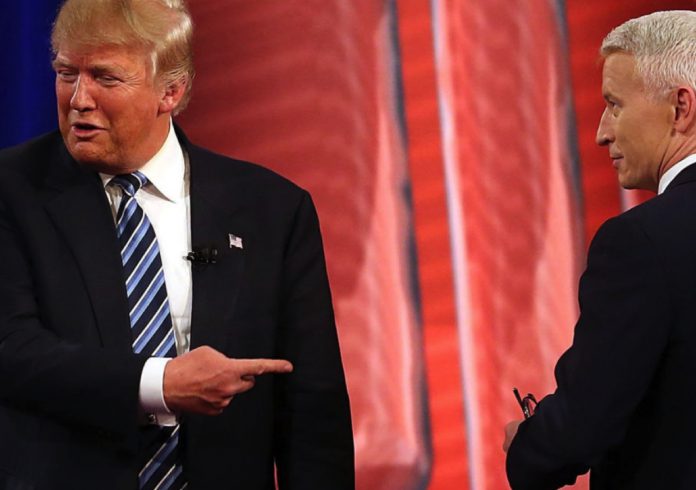 Referring to FBI director Comey’s statement confirming and clearing Clinton of any illegal activity despite Trump’s week long tyrant stating that the FBI held explosive evidence against her, Cooper asks, “Is it irresponsible if a man who might be president of the United States to speculate about something about which he has no facts?”

To which Trump’s campaign manager Conway replied, “Everybody speculated for nine days.”

Cooper who then responded “If everybody jumped off a bridge it doesn’t mean you should jump off a bridge too?” added “Don’t you think it’s irresponsible? Apparently you don’t. Don’t facts matter?”

Cooper also used Trump’s technique against him following Conway’s guaranteed that Trump did not receive a $1 million donation from Qatar, with Cooper questioning, “How do we know?”

Openly gay Cooper who has also co-moderated the second presidential debate where he encouraged Trump to specify whether he had ever been sexually aggressive with women against their will, has fast become CNN’s prime-time anchor specifically covering the United States Presidential elections, and has featured Conway as a guest multiple times.