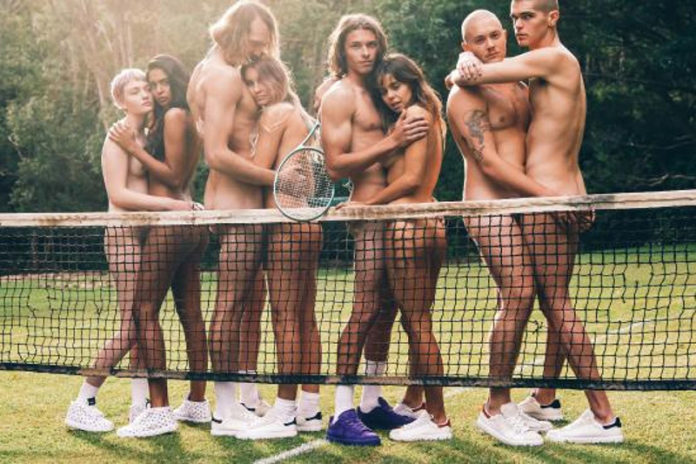 An iconic Australian footwear brand is at the centre of sexism row with the Australian Christian Lobby, all over some semi-naked shots of guys and girls in sneakers.

The storm has erupted over a 2016 campaign by Dunlop Volleys featuring plenty of naked and semi-clad models, playing heavily on the idea of sexual freedom and expression.

In the advertisement and subsequent still shots, straight and gay couples are seen kissing and frolicking in not much other than Dunlop Volleys.

For the campaign, it partnered with condom brand Ansell to celebrate sexual expression and support safe sex.

The campaign also uses the word ‘root’ multiple times in its copy. “We’re all about rooting,” it said, meaning ‘rooting’ as in for a change.

The Australian Christian Lobby’s Queensland director, Wendy Francis, has warned parents about the campaign, saying it’s “all about rooting”.

In a tweet yesterday Francis said “Parents be aware Dunlop Volley still sell sandshoes for school kids, but their website has R rated images as they’re now “all about rooting”.

Parents be aware Dunlop Volley still sell sandshoes for school kids, but their website has R rated images as they’re now “all about rooting”

After being attacked on twitter for being old-fashioned and out of touch Francis returned fire.

“Volley sandshoes ads are defended as fine for our kids. I’m ridiculed for concern. I’ll cop the ridicule & keep fighting for kid’s innocence.”

Francis has taken a strong stance against risqué advertising in the past, lobbying for the removal of a strip club billboard in Brisbane in 2013 and creating a media storm over condom advertising on bus shelters.

In a statement to news.com.au Volley’s marketing manager Maria Doubrovski said while she had expected negative feedback, the brand was shocked by the amount of hate directed towards the LGBTQ community.

“There’s been some very negative commentary. We’re not marketing these shoes to kids. All of the [marketing] channels we used were directed towards adults,” Ms Doubrovski told news.com.au.

“We’re trying to empower women and men … we want them to feel comfortable in their own skin and free to love whoever they want.”

“We’ve had a great amount of feedback from the LGBT community, thanking us for raising awareness. We’re really rooting for change,” she said.