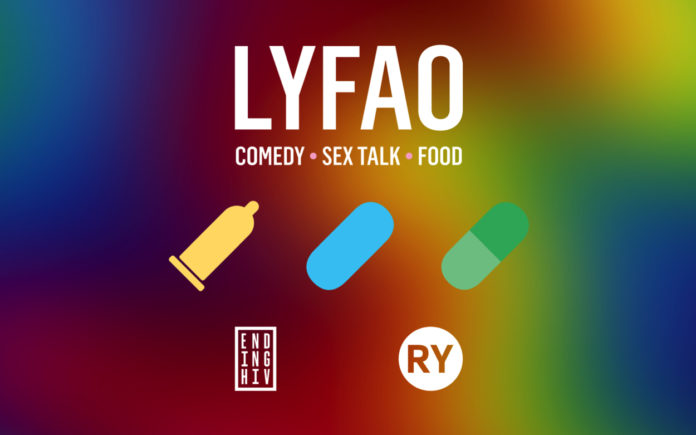 Ending HIV New Zealand has teamed-up with RainbowYOUTH in hosting LYFAO, a night of comedy and sex talk as part of Ara Taiohi’s Youth Week.

Hosted by comedian Tom Sainsbury, best known for his Paula Bennett impersonations, along with two other prominent gay NZ comedians, Eli Matthewson and James Malcolm, the event will be held at Studio One Toi Tū in Ponsonby on Thursday, May 24, 2018.

LYFAO and Ara Taiohi’s Youth Week, aim to bring young people who are at high risk of HIV into the space, encouraging them to learn more about the combination of prevention methods available to prevent HIV.

In conjunction with hosting the event, Ending HIV will also be providing free HIV testing from 5:30 pm onwards, utilising their rapid finger prick tests providing results the next day.

“Young people need to be educated so that they can make an informed decision about the best way for them to stay safe,” said Tweedie.

“Condom use is still the most preferred method for young people, not only because it prevents STIs, but because they’re more likely to continue using condoms in the future.”

Tweedie adds that Ending HIV is eager to engage with young people during Youth Week, and continue their work with RainbowYOUTH, ensuring young people are well equipped with the right information to make the best decisions around their sexual health.