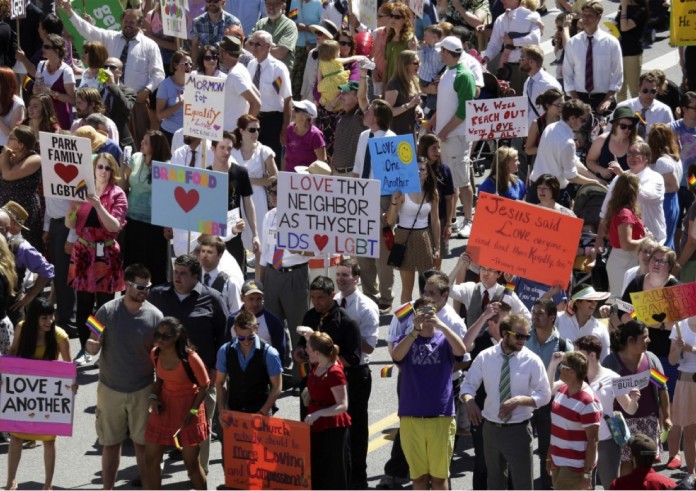 Up to one thousand people who have connections to, or are associated with the Mormon faith gathered in Salt Lake City’s City Creek Park to reject the church’s new policies which target gay men, lesbians, and their children.

The Mormon church recently announced updates to its book of guidelines with policy changes that includes disciplinary councils and possible excommunication for Mormons in a same-sex marriage, and a ban on baptisms for children of same-sex families until the children turn 18, stop living with their parents and disavow gay marriage.

As a result of the church’s intolerant and homophobic policy, as many as 1,000 people pledged to resign en masse from the Mormon Church.

According to The Salt Lake City Tribune, Attorney Mark Naugle says he has helped many Mormons expedite their paperwork to resign their memberships in The Church of Jesus Christ of Latter-day Saints.

The forms are said to be being mailed to the nearby LDS Church headquarters with the intention of having the members’ names removed from the church’s register.

According to an informal poll of people who had joined the event’s Facebook page, the majority of those who have resigned, or are planning to mail in their resignation letters say they are inactive members or have stopped attending church years ago, however they feel they have been forced to formally cut ties from the church in response to the church’s homophobic policy change.

Since the release of the updated book of guidelines, Mormon leaders released a clarification statement saying they intend to protect “the harmony” of homes by excluding families whose basic structure contradicts church teaching.

The clarification statement stresses that the policy only applies to children whose “primary residence” is with a couple living in a same-gender marriage and does not apply to children who have one gay parent and may not live with them full time.