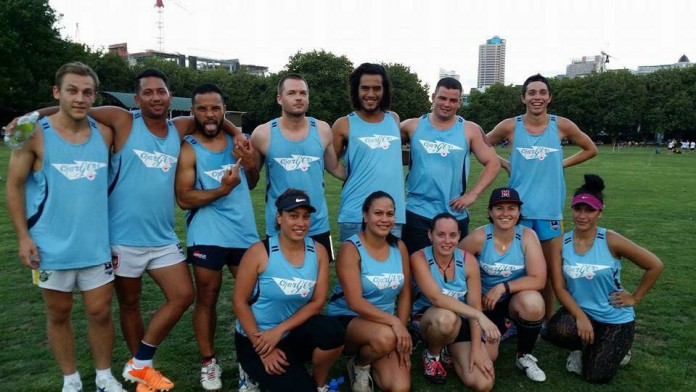 In what could be a first local Auckland sport, an LGBTI inclusive touch football team will play in the final of the A grade competition next Monday.

The competition is open to all adults across the city, the LYC Chargers are a mixed mens and women’s team that Paul Heard and Dion Hosking started in 2013.

Hosking believes the team truly reflects the entire community and he hopes that lots of supporters come down to Victoria Park on Monday night to watch the final.

“We decided to open the team up to absolutely anyone and everyone who wanted to play no matter the skill level or how they identified gender wise or sexuality.”

“Initially we struggled but as the seasons have progressed the core of the team has remained the same and has improved every season.”

The Chargers initially started off in the C grade but have made their way through the grades to the Mixed A grade where they have a genuine shot at taking the competition this Monday.

“We draw on people from all walks of life, professions and ages the youngest being 17 and the oldest mid 40s.

“The majority of the team are from the LGBTI community but we also have straight players who have embraced the team ethos and helped break down barriers.”

On Monday night the LYC Chargers will contest a preliminary final at Victoria Park at 7.40pm and should they win will be only one game away from the grand Final or A1.

“I’m so proud of this team and what they have achieved, making it to finals wasn’t easy but they have come together and done it.”

Following this competition the Chargers turn their attention towards the Autumn and Winter Leagues in the coming months.

“Should we get the numbers we would look at entering two teams. Sponsorship is always an issue so if anyone out there would like to help keep the LYC Chargers on the field please feel free to contact me.”