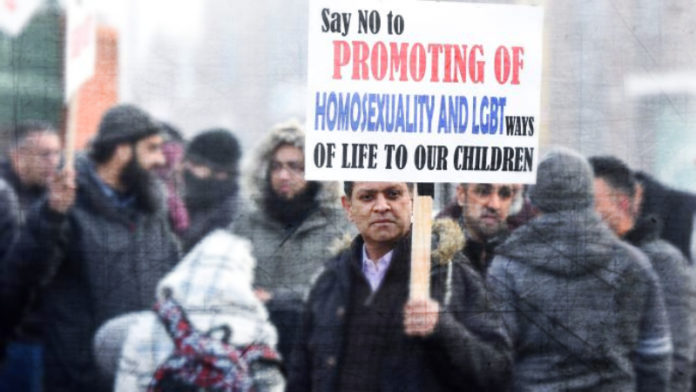 A new report on anti-LGBTI protests that occurred outside two UK schools teaching LGBTI rights, has revealed that homophobic pro-Islamist extremist groups were responsible, with the aim of fostering division.

The year-long probe by Sara Khan from the Commission for Countering Extremism detailed evidence that the school protests were stoked by Hizb ut-Tahir and other extremist organisations, describing them as “hateful extremism” with some protestors going beyond lawful limits.

Hizb ut-Tahir who published an article that described the school protests as one front in a battle, with Muslims resisting the “neutralising” effects of a liberal order that “hollows” religions and forces conformity, and part of a wider “assault on conservative Muslim society” by the “liberal agenda.”

The schools which found themselves at the centre of homophobic hate, after it was discovered that they where teaching quality and LGBTI rights, told Khan of “entirely baseless” allegations of paedophilia, aggressive shouting, abusive online messages and “extremely intimidating” body language towards teaching staff.

The report concluded that the underlying purpose of the anti-LGBTI+ rhetoric was to “promote the extremists’ belief that Western liberalism was a threat to Islam.”

Khan ‘s report added, “Elements of the protesting appear to be underpinned by a hatred of LGBT+ people and a conviction that it is not possible to reconcile Islam (and other faiths) with support for LGBT+ people.”

The Commission is now calling for an “urgent response” from the UK government, and “a total overhaul” of its strategy on extremism.