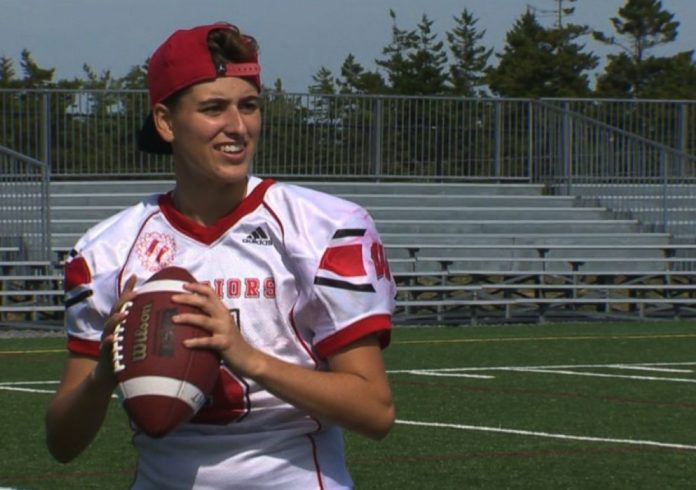 Cooley, who was initially “really nervous” about his ambition to join the sports team says that his fears that somebody wouldn’t be OK with him being transgender, where unfounded as the entire team welcomed him with open arms.

Cooley who says part of the student body at his former school “wasn’t very accepting of the LGBTQIA community,” resulted in him feeling unaccepted and lonely, which was why he transferred to Halifax West.

“Everybody has been welcoming and just treats him like one of the other guys,” explained the teen’s mother, Pam Reinders-Cooley,to CTV News.

“That’s what he wants to be … included, and he wants to be one of the other guys,” adding, “I thank the team for everything that they’ve been doing and have done and continue to do. They seem to be a great group of kids.”

David Kelly who is the head coach of the football team, has nothing but praise and support for Cooley saying that the teen’s participation “helps the team understand issues that transgender youth face” giving them a new perspective that they “probably would not have had before.”

Cooley’s family hopes that their story will help inspire other parents to realise “the beauty that can come from standing behind your kids and supporting them.”

“He’s never been afraid of a challenge, and we’ve always supported him as much as we could,” explains Cooley’s faller.

“It isn’t always easy, but at the end of the day, your goal as a parent is to make sure your child is a productive citizen in society, and when we look at him, we see that he is a good kid.”

Watch the Cooley’s inspiring story below