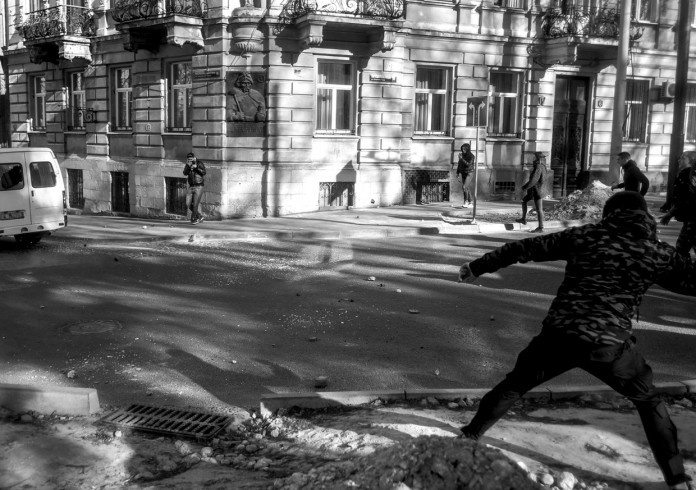 Themed equality, an LGBTI festival based in the Ukrainian city of Lviv was forced to be abandoned following intimidation and protests from far-right groups.

Organisers of a regional LGBTI event which formed part of a larger national festival say they were forced to abandon the event following a series of setbacks concluded by a venue being surrounded by approximately 200 members of far-right groups shouting “Kill, kill, kill.”

Olena Shevchenko of the NGO Insight who helped organise the event explained that the program for the festival included film screenings, literary discussions and public events, however, the event’s venues began pulling out of supporting the event as neither the police or the city’s authorities including the Mayor were prepared to support or back the festival.

“The hotel we had booked for people coming from outside Lviv told us we could not stay there,” explained Shevchenko.

“When we arrived, the administrator told us the city authorities had told them we were perverts, they had Googled us and said people like us should burn in hell.”

A court hearing was also held ruling that all public events planned for the festival should be banned. Shevchenko said dozens of far-right young people, some in masks, attended the court hearing and intimidated her.

The decision was finally made to abandon the festival after far-right groups surrounded the new supporting hotel where about 70 participants in the equality festival had gathered.

Shevchenko explained that with approximately 200 people gathered outside, participants notified the police, only to find one police car arrive, over an hour later. Eventually, the participants were evacuated by bus, as the onlooking far-right members shouted: “kill, kill, kill.”

MP Mustafa Nayyem, who is one of the initiators of the Maidan revolution of 2014 that ousted president Viktor Yanukovych, took to Facebook to express his disappointment with the official response to the incident.

“The authorities should always react when people’s rights are infringed upon. It doesn’t matter whose rights it is – LGBT people, the opposition, patriots, migrants, women, the elderly or children. The silence of the Lviv authorities and response to these events differs little to the indifference of the authorities under Yanukovych.”

Co-founder of the independent Hromadske TV, Maxim Eristavi said the huge public controversy has been encouraging.

“On the one hand, it’s a very dangerous precedent when it seems like the authorities are encouraging the violent rhetoric of elements of civil society. On the other hand, there have been so many statements of support from officials and ministers, which is something that would have been unthinkable two years ago.”

Despite the aggressive and intimidating tactic used by the far-right groups, the cities Mayor, Andriy Sadovyi, appeared to blame both the LGBTI group and the far-right members in equal measure.

“Yesterday’s events in Lviv are a result of a carefully planned provocation. Participants from both sides were conscious or unconscious parts of the whole picture,” he wrote on Facebook.