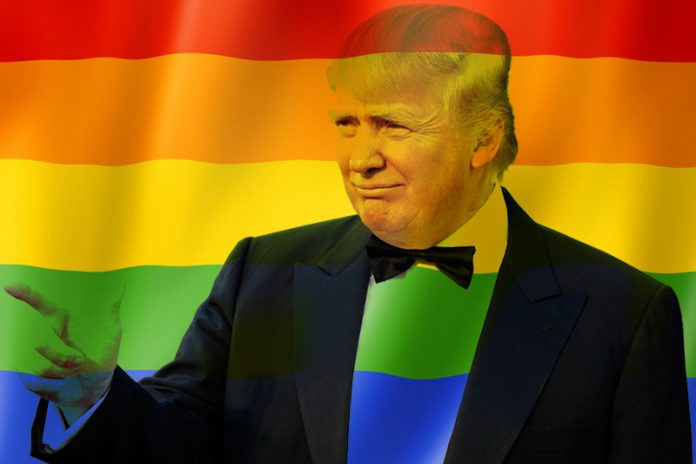 In the wake of the horrific events in Orlando last weekend both presumptive US Presidential nominees have been positioning themselves to the LGBT community and declaring they are the most ‘gay-friendly’.

In a speech by Donald Trump last week he said he was the better candidate for president to look after the gay community.

“A radical Islamic terrorist targeted the nightclub not only because he wanted to kill Americans, but in order to execute gay and lesbian citizens because of their sexual orientation,” Trump said.

He then called the attack a “strike at the heart and soul of who we are as a nation,” as CNN reported, saying it was an “assault” on people’s ability to “love who they want and express their identity.”

In general, the gay community leans towards Hillary Clinton as more of an ally than Donald Trump for many reasons, but this speech and others in the past week have shown for the first time in American history a likely republican nominee chasing the gay vote.

Through history, or at least from the time gay rights became a talking point in America, Republicans have been deeply conservative on the subject.

Some have outright condemned it, while some have pretended it doesn’t exist.

Politico, US political magazine, reported that the Republican Party’s most recent official platform, which was adopted during the 2012 Republican convention, expressed its support for a constitutional amendment defining marriage as a union of one man and one woman, and castigated what it called “the court-ordered redefinition of marriage” as “an assault on the foundations of our society.”

Not Trump. He’s not just tacitly supporting equal rights for gay people, Trump has actively spoken about the issue.

The New York Times said that when pop star and gay icon Elton John got married to his boyfriend David Furnish after England legalized same-sex partnerships, Trump is reported to have said : “I know both of them, and they get along wonderfully. It’s a marriage that’s going to work…I’m very happy for them. If two people dig each other, they dig each other.”

As Gregory Angelo, head of a Republican group that supports gay rights told The New York Times about Trump: “He will be the most gay-friendly Republican nominee for president ever.”

According to Barron, Trump is the “most pro-gay Republican nominee ever”.

Barron is the co-founder of GoProud, a conservative gay group and a strategist for the Republican Party.

He said that the issues Trump focused on, such as terrorism, healthcare, retirement security, and jobs, were all reasons for LGBT Americans to vote for him.

Speaking to CNN, Barron said: “All of those issues impact the LGBT community. I have no doubt that Donald Trump presidency would be better for LGBT Americans.”

“In this election, either Hillary Clinton is going to be the next President of the United States or Donald Trump is. For me, despite my differences with Trump in the past, it was a slam dunk, I want Donald Trump to be the President.”

On the other side of the coin many have declared Trump dangerous and due to his massive flip-flops, he could be an ally one day and a fierce opponent the next.

Dan Savage, an American writer and LGBT activist, called Trump the “enemy of the LGBT community.”

Columnist Dan Savage: “Donald Trump Is The Enemy Of The LGBT Community Just As He Is The Enemy Of The Muslim Community.” On the June 14 edition of MSNBC’s All in with Chris Hayes, nationally syndicated sex-advice columnist and LGBT activist Dan Savage criticized Trump for attempting to pit the LGBT community against Muslims, commenting that “LGBT people come from all races, all faiths, all ethnic backgrounds, all classes” and noting that Trump “has pledged to undo marriage equality”.

To be fair, both Clinton’s and Trump’s records on LGBTQ issues are up for debate.

Trump has spoken less disparagingly of gays and lesbians than he has of other minority and affinity groups, though he has opposed issues like same-sex marriage.

He has said he would allow transgender people to use any bathroom at Trump Tower but also argued that states should be allowed to decide their own policies concerning bathrooms for transgender individuals.

Hillary Clinton has gained the endorsement of most major LGBTQ organizations and has campaigned with her support of same-sex marriage and transgender rights.

But she did not always support same-sex marriage and has made some missteps with the LGBTQ community before — most recently during the funeral of Nancy Reagan when she argued that Reagan had helped advance the nation’s conversation on AIDS. (Nancy Reagan’s husband was actually silent on AIDS for years.)

Still, Clinton seems to have the advantage — in a May Gallup poll, 54 percent of those who identify as LGBT view Clinton as favorable while only 18 percent view Trump as such.

Time will tell if the gay community agrees with Trump come November.