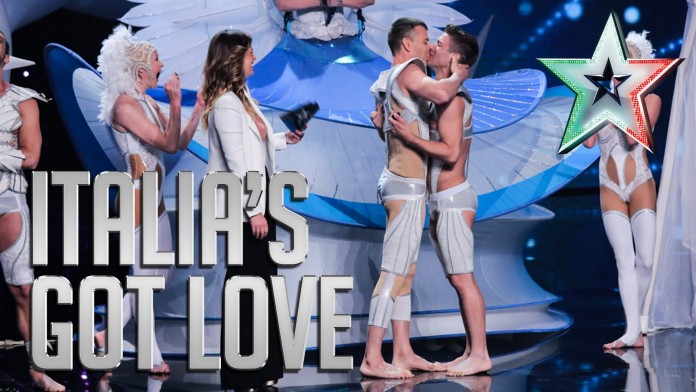 Viewers of Italia’s Got Talent where treated to Italy’s first gay marriage proposal on television when a gay acrobat proposed to his boyfriend. The proposal was live on Canale 5, one of the main commercial national networks, and was sealed with a kiss.

The proposal and kiss was extremely well received by the audience and also the judges who appeared very supportive.

Italy is traditionally a conservative country so a gay kiss on national television is a rather big milestone.

Homosexuality has been legal since 1890, however same-sex marriage is still not.

With only straight, married couples being eligible to adopt, Italy’s anti-discrimination laws don’t cover gender identity and only protect discrimination based on sexual orientation when it comes to employment, but not in providing goods and services.

The acrobat interrupted the judge’s critique to address his boyfriend and fellow performer.

Turning to him he said in English: “We have performed tonight in a ring.

“And this ring has brought us together in our work, in our passion, in what we love. And I would love to know…”

He then got down on one knee and held out an engagement ring. His tearful boyfriend said ‘yes’.

Consequently, the happy couple legally are unable to get married in their home country of Italy, however the spectacle will be sure to raise the issue again and draw attention to the issue of same-sex marriage in Italy and hopefully around the world.