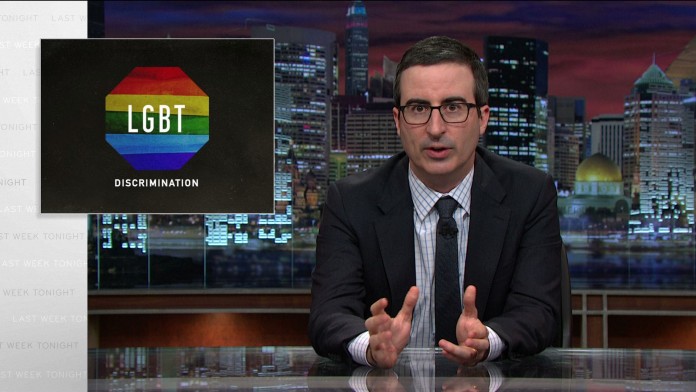 On a recent episode of HBO’s Last Week Tonight, host John Oliver’s main topic of discussion was why it was important to introduce federal protection in the US against anti-LGBTI discrimination and the Equality Act that’s currently being debated in the US Congress.

Oliver also discussed his thoughts on people who claim that their religion is a reason to refuse providing services to gay people.

Oliver hilariously highlighted this with an example of  Jack Phillips, a Colorado baker, who had refused to bake a wedding cake for a same-sex wedding.

Phillips went on to say that the US Constitution, guaranteed him the right to practice his faith anywhere, anytime without restriction.

“It also gives me the right to free speech anytime, anywhere,” said Phillips.

“The constitution isn’t the star in Super Mario Brothers. It doesn’t make you invincible so you can do whatever the f*** you want,” exclaimed Oliver.

“Maybe it’s time we just fixed this nationwide once and for all,” continued Oliver.

This leads him into an explanation of the Equality Act which is currently before Congress, which has over 200 co-sponsors, none of which being Republicans.

By contrast, two Republicans have sponsored proposals for a National Lobster Day in September, which is something Oliver considers to be marginally less important, or pressing.

“This bill represents the bear minimum of not being discriminated against and this should be what represents of true gay tolerance, not whether or not you would attend a gay wedding.”

The Equality Act has the backing of many major businesses in the United States, including Apple, Twitter, Nike, Intel, IBM, Google, Facebook and American Airlines, to name a few.

HBO’s Last Week Tonight contacted all the current Presidential candidates for 2016 and asked them, ‘Would you support passage of a federal law or laws that prohibit discrimination based on sexual orientation and gender identity, specifically in the areas of employment, housing, public accommodation and access to credit?’

Unfortunately only four candidates replied to them, with three Democratic candidates saying they supported such a law and one, a spokesperson for GOP candidate Rand Paul, simply saying, ‘We’ll pass, thanks.’

Watch this must see, hilarious yet concerning video below.