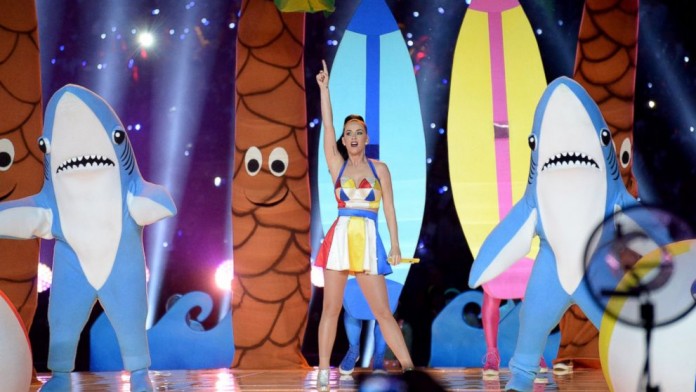 For many Americans Super Bowl day is bigger than the Olympic Games, bigger than the World Cup. And that’s just those that love American Football, or who can actually understand it.

For those that don’t the Super Bowl has its place in every lounge room due to the commercials, yes those commercials that they pay $4.5million a spot for…and the half time extravaganza.

This year the National Football League went safe. No risks of costume malfunctions or power going out, they invited Katy Perry along to perform in the Super Bowl Pepsi Half Time Show knowing that she would appeal to the three G’s – The girls, the gays and the grannies…and what a show it was.

From the moment Katy Perry stepped onto the arena, well actually rode onto the arena aboard a giant lion, you knew this was to be spectacular. In fact it was dazzling and well choreographed but maybe not in the spectacular league.

Katy sung “live” so massive kudos for that, and she had four costumes changes in amongst an electronic stage which change between a chess board, a platform and a beach scene. She also had dancers dressed as trees and suns and sharks….weird but ok then.

She had assistance from Lenny Kravitz and Missy Elliott, plus an array of dancers all designed to take your eye off the talent for a split second….and then back to Katy.

Katy performed her signature hits and finished with one of her biggest, firework, ridding a flaming 3D star that flew across the infield while the stadium and the surrounds were ablaze with fireworks. The perfect finale.

Her performance, hmmmm pitchy at best, but then she is singing to a Phoenix Stadium of around 75,000 and to sing live in that situation is pretty incredible. But the energy and shear choreography of the whole event made it certainly worth watching.

Oh and the Patriots won the main game 28 to 24 over the Seahawks.