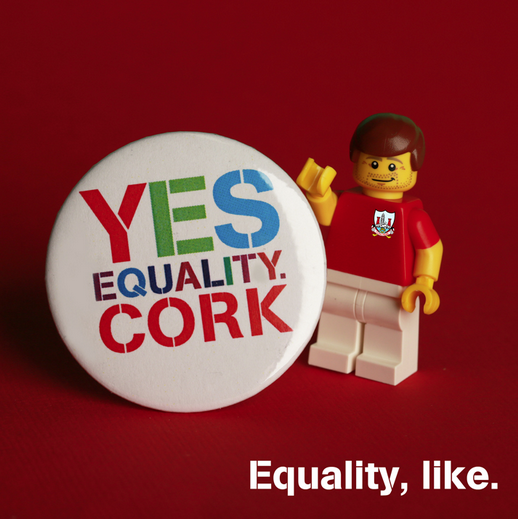 As the Marriage Equality debate in Ireland heats up, Debbie Hickey from Studio Ten Media has created some amazing Lego creations for the historic Referendum on May 22.

The Lego-creations feature a wide range of popular caricatures from TV shows, Movies and Public figures.

They were made in support of the “Yes Vote” and it follows the TV commercial that was launched in April.

The first set explored basic comparisons between gay marriage and The Bible.

“Are you against gay marriage because of The Bible? Yes – Nice Tattoo, Tattoos are also banned in Leviticus”

“Are you against gay marriage because of The Bible? Yes – Do you eat Bacon? I love bacon! Leviticus bans the eating of pork”

If the Referendum passes it will make Ireland the first country in the world to legalize same-sex marriage through popular vote.

Other messages in the Lego creations included;

A black lego man and a white lego woman with the message “Our marriage was once illegal too. – Be on the right side of history.

Keane wrote that he is “strongly supporting a ‘YES’ vote” for the May 22nd referendum, which – if passed – would change Ireland’s constitution to allow same-sex marriages.

“Most of us will have friends or family who, up to now, have been denied the right to marry their loved ones or have been made to feel excluded because of their sexuality,” wrote Keane.

“To me, this feels wrong. I am a very proud Irishman and it is important to me that our country does, and is seen to, treat all of its citizens on equal footing.”

The captain of the Irish national team since 2006, the 34-year-old Keane holds Ireland’s all-time scoring record with 65 goals in 139 career international appearances.

The reigning MLS MVP scored two goals in his first four games this season before missing the Galaxy’s last six contests due to a groin injury.

Keane’s LA teammate Robbie Rogers publicly came out as gay in February 2013, briefly retiring from soccer before joining the Galaxy later that year.