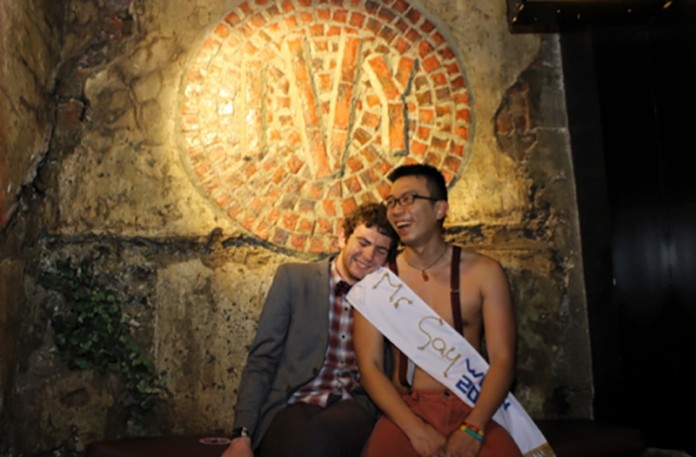 A volunteer for Habitat for Humanity and a freelance architectural drawer has been named Mr Gay Wellington 2015 after the competition was held at the Ivy Bar on Saturday night.

The annual event/competition, contested by six Wellingtonians, has been hosted by Ivy Bar and Cabaret for past seven years.

The competition was extremely close with 28 year old Bernard Lee, claiming the victory.

Lee entered Mr Gay Wellington after he jokingly posted a status on Facebook saying he was going to put his name forward for the Competition.

“It was the unexpected amount of support everyone gave me, especially from my family at Love Your Condom (LYC) Wellington, I wouldn’t be standing here as Mr Gay Wellington without them,” said Lee after his victory.

“I would love to use the title as a stepping stone to promote community based volunteering.”

Speaking with Eikon at the event on Saturday night, Ivy Bar Manager Steven Mawhinney said, “I really did not envy the role the judges had in choosing a winner from such an amazing group of guys.”

“Every single one of them deserved the title and to pick the winner was a huge challenge.

“I am very happy with the result, Bernie is very deserving of the title and I look forward to working with him over the next year and beyond.”

Steven who has been running the past three events for Ivy says that Mr Gay Wellington should be about finding role models for young gay men.

“Mr Gay Wellington should be, and is more that just finding the hottest guy. It should be about finding a guy who stands for and fights for everything that is good about being a gay man in New Zealand.”

Matt Fistonich – Mr Gay New Zealand 2015, was one of four guest judges for the event.

“I was extremely happy to be in Wellington, helping to crown Mr Gay Wellington 2015,” Fistonich said.

“I found that all the applicants where amazing in their own individual ways and I was very proud to see Bernard take out the competition.

“I believe It was Bernard’s passion for the community and his volunteer work that gave him the edge over the other competitors, I think he will make a great role-model as he is down to earth and a genuine good guy that people can relate too. For me that is what matters most.”

Matt says he is hoping to have a more diverse and inclusive competition for next year’s Mr Gay New Zealand contest.