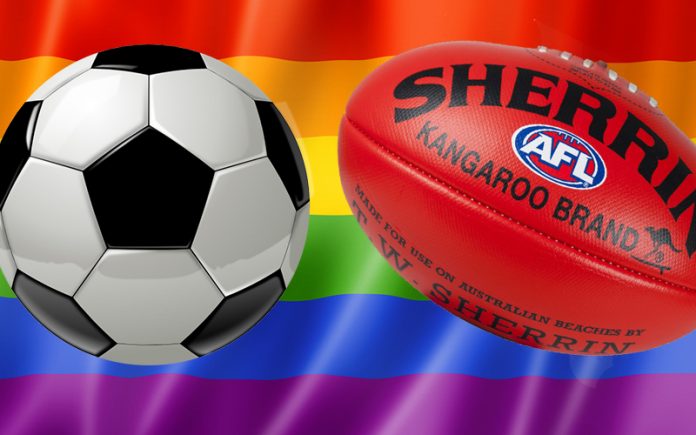 We have written a lot recently about the need for elite sportspeople to come out to assist the gay youth of today to see the required sporting role models.

In Australian Football this year we have seen renewed interest in the first AFL player to come out of the closet.

Former Hawthorn champion Russell Greene called on gay players to come out as a group to make it easier on each other, while Nicky Winmar has put his support behind an outing after he announced his own son was gay.

And in the past week, Eikon has been contacted by two separate sources who have claimed the first player to come out will do so in the week of the AFL Grand Final.

This was supported by a report on Melbourne radio station 3AW on Thursday which stated exactly the same thing that a current AFL player will come out as gay next week.

Further, a field, rumours have continued to circle across the world game of soccer with stories of Premier League footballers planning on coming out.

There was the controversy last year about Cristiano Ronaldo of reportedly having a secret gay lover and earlier this year we reported on a new movie called Wonderkid which explored the pain and inner turmoil of a player who is afraid to come out of the closet.

So why the fascination and is it the pot of gold that many in our community suggest? The recognition that being gay will finally permeate the upper echelons of our sporting culture.

As the interest continues to grow another movie is soon to be released in the UK which again tackles the subject of closeted soccer players.

Starring Looking star Russell Tovey, The Pass is a gay football drama that investigates three separate nights over a ten year period in the lives of two closeted English footballers.

On the night before his first big international game, Jason (Tovey) shares an unexpected kiss with team-mate Ade (Kene) amid pre-match tensions, and the emotional repercussions have an impact on the lives of both men across the next decade.

The Pass is adapted for the screen by John Donnelly from his hit play, first presented at the Royal Court Theatre, and also stars Hollyoaks heartthrob Nico Mirallegro and actress Lisa McGrillis.

Producer Duncan Kenworthy said: “As a season ticket holder of a major Premier League Club, I know just how much interest there is in the question of why no currently-playing Premier League player has come out – or has felt able to come out – as gay.

“The Pass is by no means an issue film, but John Donnelly’s wonderful screenplay puts very handsome flesh on the bones of this modern anomaly, imagining the pain, passion and complexity of the lives of elite footballers always inches away from fame or failure, and wondering whether honesty is worth the price.”

The film opened the BFI Flare Festival earlier this year and is being presented as part of the 60th BFI London Film Festival next month, before receiving general release in cinemas in December 2016.