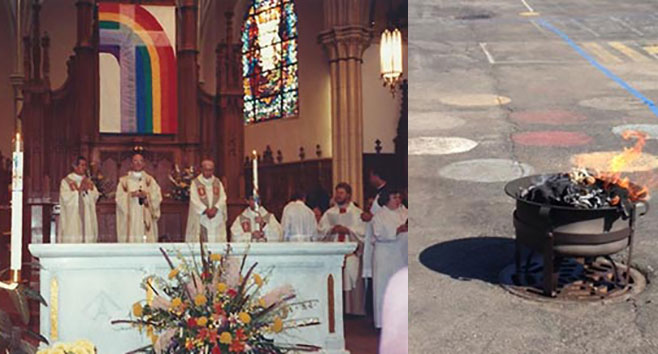 A rainbow flag that once hung in a Catholic church in Chicago has been burned by a priest, defying his Archdiocese.

According to the Chicago Sun Times, Rev. Paul Kalchik informed parishioners in an email on September 2 that, “On Saturday, September 29, the Feast of Saints Michael, Gabriel and Raphael, we will burn, in front of the church, the rainbow flag that was, unfortunately, hanging in our sanctuary.”

The flag, which features a transparent cross over the rainbow, once hung in the church to welcome LGBTQ parishioners.

It had been in storage for more than a decade until it was recently found by Rev. Kalchik.

After his plans to burn the flag were made public, Kalchik decided to proceed with the ceremony earlier than scheduled.

On 14 September, he led seven parishioners in a prayer of exorcism as the flag was cut up into seven pieces and set alight in a portable firepit outside the Resurrection Catholic Church in Avondale

Kalchik ignored instructions from Cardinal Blase Cupich that he not burn the flag and argued that the flag was the property of the parish and not the Archdiocese or the Cardinal.

“What have we done wrong other than destroy a piece of propaganda that was used to put out a message other than what the church is about?” Kalchik said.

The priest has also claimed that the sexual abuse scandal that has engulfed the Catholic Church is “definitely a gay thing” and insisted that homosexuality is “against God’s law.”

On Wednesday, council Alderman Deb Mell led a group of “supporters of peace, love, and tolerance” in a protest outside the church against the flag burning.

“I’m calling on Pope Francis and Cardinal Cupich to send this hateful bigot packing,” she said on Facebook.

“If the church is serious about restoring trust with its parishioners and spreading a message of love and tolerance, this is a perfect opportunity.”

She added: “This is a hate crime-plain and simple. I’m asking the City and Federal government to treat it as one.”

The Archdiocese of Chicago said in a statement that, “we are following up on the situation. As Catholics, we affirm the dignity of all persons.”

While Pope Francis has shown a willingness for the Catholic Church to be more accepting of gay individuals he has remained opposed to the recognition of transgender people, same-sex families and same-sex marriages, describing these in public statements as threats to the family and humanity.

According to official Catholic policy, gay sexuality is defined as “acts of grave depravity”, as “intrinsically disordered” and “contrary to the natural law”.