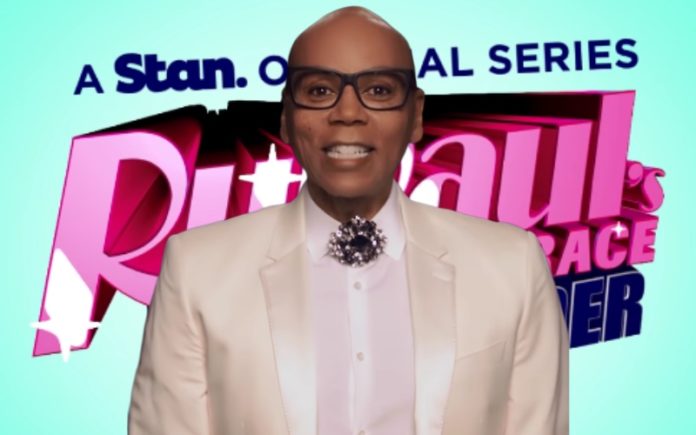 As reported by Gay Nation over the last four weeks, RuPaul’s Drag Race Down Under is now under production in Auckland, New Zealand and RuPaul will host the series alongside co-judge and Drag Race veteran Michelle Visage.

Stan Australia and TVNZ have today officially announced the production which is being produced by World of Wonder in collaboration with Warner Bros. International and will be seen on screens later in 2021.

The 8-part local adaption of the global hit series will see the most fabulous and fierce local drag queens compete to be the first-ever Down Under Drag Race Superstar.

As a way of trying to keep something a secret, the drag queens competing in the premiere season of Down Under, the third judge on the main panel and celebrity guest appearances will be announced later this year.

The Downunder version of the series will see queens serving high fashion realness, mini and max challenges, shady and heartfelt moments in the workroom, and of course, the all-important lip-sync for your life battles.

RuPaul, who is holed up in a swanky Auckland Hotel finishing off 14 days of mandatory quarantine, is excited about the new franchise.

“I cannot wait for everyone to see that Down Under queens have some of the biggest charisma, uniqueness, nerve and talents in the world,” RuPaul said.

“Thank you to Stan and TVNZ for providing a platform for these outrageous drag artists to share their heart, soul and humour.”

Nick Forward, Stan Australia Chief Content Officer said the original series is already a huge hit with their audience so it is a thrill for them to be working with RuPaul on this local series.

“You asked for it Australia, and now we’re bringing it to you – finally, our very own Aussie Drag Race, the new Stan Original Series RuPaul’s Drag Race Down Under,” Forward said.

“We can’t wait to reveal all the guest judges and see what our local queens bring to the global sensation that is RuPaul’s Drag Race.”

“The dazzling queens of Australia and New Zealand have always been an inspiration to us, so we are thrilled to team up with our local production partners Stan and TVNZ to bring the creative genius of drag down under to international audiences on WOW Presents Plus,” Executive Producers Fenton Bailey and Randy Barbato of World of Wonder said.