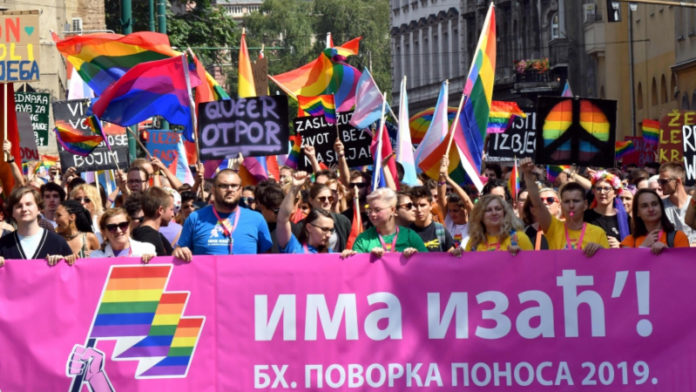 The capital city of Bosnia and Herzegovina, Sarajevo, has hosted its first-ever LGBTI pride parade, with over 2,000 people marching against homophobia and hate crimes directed at the community.

The parade which was held on Sunday took place in the shadow of growing far-right aggression and views in the Baltic state.

Leading the parade with a large pink banner stating “Ima Izac” (Coming Out), participants of the parade marched over 1.5 Kilometres, with the parade organiser, Lejla Huremovic, urging the participants to visibility send a message that any violence or prejudice being faced by the LGBTI community must end.

“Today, we say louder than before that we will fight with bravery and dignity for our lives [to be] … free of fear and violence,” Huremovic said.

“If there was no violence I wouldn’t be here today.”

“This gives us strength and faith that prejudice against us will start to wane and that it will become better for all of us.”

It is reported that over 1,000 police officers including riot police sealed off the parade route in the Sarajevo city centre, protecting the parade from the estimated 150 counter-pride protesters in a neighbouring park.

Speaking with AFP, Police spokesman, Mirza Hadziabdic said that the event “passed off without incident,” however, explained that a history of disturbances at LGBTI events had threatened to dampen and cause disruption of the event.

Bosnia is the last Balkan country to hold a Pride parade, seen as a test of tolerance of minority rights as it seeks to join the European Union.

EU diplomats and the U.S Ambassador to Bosnia, who is gay, joined the march in support of LGBT people.

“This is an important step in the protection of the fundamental rights of all citizens in Bosnia and Herzegovina, including of LGBTI persons, who have the right to live their lives free from discrimination, abuse and threats…,” Johannes Hahn, the EU enlargement commissioner, said in a tweet.

#BiH: I welcome the holding of the first #Pride parade in #Sarajevo today and wish the organizers and participants a peaceful event! https://t.co/HdBQLoqHNz 1/2