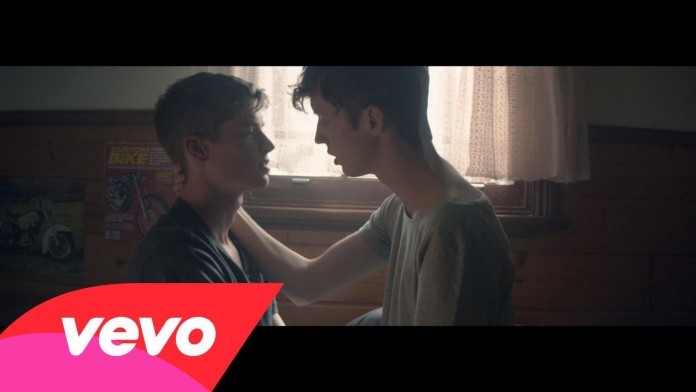 Many music critics have been unfairly holding a stigma against YouTube stars who turn music artists, but thankfully this does not seem to be the case with Sivan, and after one listen to the track Wild and one viewing of the music clip its not hard to see why. This has moved Sivan from just YouTube host/singer to developing musical genius.

It begins as a catchy pop tune, and yeah they have to do that to sell songs to the younger demo, but then the song and particularly the clip takes a darker deeper turn where you get to feel the under-current of conflict within this story of two young boys growing up together and the emergence of same-sex feelings creep in amongst the family abuse issues.

We already cant wait for part 2 and 3.

Mitcham misses adding another trophy to the cabinet

Well he’s won an Olympic Gold Medal for his diving pursuits and he’s led the Sydney Mardi Gras Parade but tonight Matthew Mitcham missed out on taking away the ultimate in gay trophies, the Dancing With The Stars Mirror Ball trophy for winning the current series of Seven’s dance show in Australia.

Having never done any ballroom dancing before, other than the small amounts in his cabaret show, Mitcham took to dancing like a duck to water (see what I did there) and like his diving, through everything into his training and made the final up against Australian racing/fashion report Emma Freedman.

The final judges scores went the way of Freedman 60-57 and when the viewer votes were added to the judges votes it was Freedman and her partner Aric Yegudkin who took the trophy.

Mitcham impressed all in both his dancing and sparkling charm across the ten week series.

We wonder what’s next for the clearly talented, entertaining perfect gay role model.

The world of YouTube was abuzz this weekend when two of the most popular channel hosts were married in a ceremony in England. This isn’t necessarily news but to think Jim Chapman (2.3m subscribers) and Tanya Burr (3.2m) both met through the early stages of YouTube and their place has become the home away from home for many of the other top YouTube hosts across the world.

Caspar Lee and his housemate Joe Sugg (Who both have reached 5 million subscriber milestones in the past few weeks) were present at the wedding and posted on Instagram.

In other unrelated news, the world’s top Gay YouTube star Tyler Oakley was spotted by many readers on Grindr in Sydney over the weekend. Tyler is in Australia to take his live show (Tyler Oakley’s Slumber Party) across the country and I’m sure some of the local lads welcomed him to Sydney the best way they can.