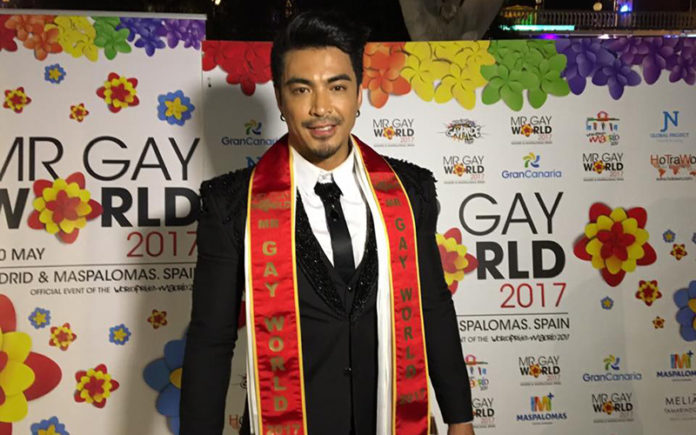 Newly crowned winner of Mr. Gay World 2017 John Raspado said his win will give a much-needed boost to members of the LGBT community in the Philippines.

Raspado won the title in front of more than 10,000 people at a special Mr. Gay World show held as part of the Maspalomas Pride Festival in the Gran Canaria Spain on Wednesday night.

Raspado was a clear winner against the 21 other nations, not only taking out the top honour but winning Swimwear, Formalwear, formal interview, social media challenge and the popular vote.

The victory for the Philippines is the first ever by an Asian country in the nine years of Mr. Gay World (Hong Kong took over the 2015 title after six months when initial winner Germany relinquished the crown).

Soon after stepping off stage, Raspado spoke with Eikon and explained that the win had special importance to himself.

“I have mixed emotions because it’s the same day(today) in 2014 that I won the National Competition(In the Philippines) on tv where I came out as an openly gay person,” explained Raspado.

“Manilla was colonised by Spain for 300 years and there they spread Christianity and I just love to bring home this award, this sash as a symbol of hope for the LGBT community in my country.”

After a grueling week of challenges to get to the finale, Raspado explained that he was not well during the competition so didn’t expect the victory.

“I had a slim chance coming in because I was under the weather, I was having nose bleeds every day.

“I’m very very happy, because this year all the delegates were very beautiful,” said Arteaga who also won most photogenic and best national costume which took seven people to dress him before the performance.

“It’s fantastic because my land is very wonderful and the public is supporting us and very happy and I can’t believe it now.”

Third place getter Raf Van Puymbroeck from Belgium was the clear favourite heading into the finale but it was not enough to win any of the supporting categories but still a strong third.

“I’m feeling good, very thankful very grateful. I think this is the most craziest thing I’ve ever done,” said Puymbroeck before explaining how he felt the weight of expectations on his shoulders before the finale.

“Little bit but I just try to always be myself, just do the best I can and keep my feet on the ground, work hard, and we’ll see what happens.

“Yeah, I was very surprised because there was a lot of very good contestants so yeah I was really surprised.

“He’s a good winner[Philippines], think he did great throughout the whole journey so I’m not surprised he won.”

Others from Asia and Oceania including Australia’s David Francis placed seventh out of the 21 while New Zealand’s Charlie Tredway took home the Mr. Congeniality category and Indonesia’s won the written test award.

Mr. Gay World Director for Asia, Oceania and Africa Igor Scheurkogel was delighted with the results and said it showed a change in culture and the way these competitions are treated within his regions.

“The key in my region has been the producers, for them it’s not about the pageant it about the cause, it’s not just in our region, but globally,” Scheurkogel explained.

“It’s not a meat show. It’s not about body type and if you look at especially my region Asia Africa and Oceania, there hasn’t been this six-pack meat show it has been about the people and the profile and what they do in their communities and that’s what I hope can be spread across every region.

“We need to move towards representatives addressing these issues and not just go to pride because we need pride but we need people that can address these issues as well.