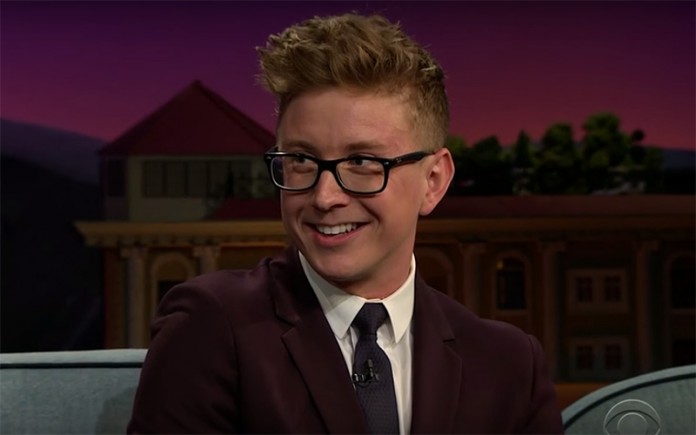 Tyler Oakley may be the star and producer of “Snervous,” the documentary chronicling a behind-the-scenes look at his life on the road during his Youtube “Slumber Party” tour, but as his movie premiered around the world there was only one question everyone wants to be answered. Did he win $1 million on The Amazing Race?

The LGBT icon was fresh off a month of digital silence shooting due to the fact he has been tripping around the World with his best mate Korey Kuhl on a special “Social Media stars” version of the show which will be released early next year.

One of his first media engagements following his return was to visit James Corden on the Late Late Show and he remained very coy about whether he took out the race or not.

When asked by Corden whether he took out the top prize Oakley said, “I don’t know, I can’t say, you’ll just have to tune into CBS this spring to find out.”

“I had the time of my life, I grew and I feel like I found myself,” to which Corden responded, “But did you find a million dollars.”

The Amazing Race is a reality tv show where teams of people travel through different countries across the globe completing tasks and looking for clues that lead them to the check-in on each episode.

The last teams to reach the check-ins are usually eliminated until there are only three teams left and then the first team home wins $1 million.

For Oakley, he had to schedule all of his regular youtube videos and podcasts a month ahead of schedule as contestants aren’t allowed to take any electronic devices with them on the competition.

“I had to turn in all my stuff, I went with just a backpack,” he explained o the Late Late Show.

“The first day it felt like I was missing a limb, truly, but then like three days into it I was like a free man and I was seeing new things outside.

“Only when I was getting lost would I have to ask strangers to use their phones for directions.

“Sometimes some of my viewers who watch my stuff (On Youtube) would come up for selfies and I say of course yeah but then can I use your phone. Girl, I’m lost in your country.”

His return to normal life has been a whirlwind as preparations for his movie release kicked into gear.

“I still feel like a crazy human I’ll see like anything and I’m like that’s a clue or ill see a landmark and start running up it.”

Tyler Oakley’s movie Snervous (Combination word of Scared and Nervous which his mum uses in the movie) premiered on Friday night in Hollywood.

Directed by Amy Rice (By the People: The Election of Barack Obama), the documentary follows Oakley on his sold out international Slumber Party tour across the U.S., U.K., and Ireland.

As one of the biggest digital stars today, Oakley’s no stranger to sharing his life online, but the film promises, even more, intimate looks into his relationship with his family and followers.

“The movie follows a year in the life and it’s for anybody, it follows the tour it follows conventions everything,” said Oakley.

The movie has been released into selected cinemas in the US and is available as a digital HD download from iTunes and other retailers. For more details visit the www.snervous.com