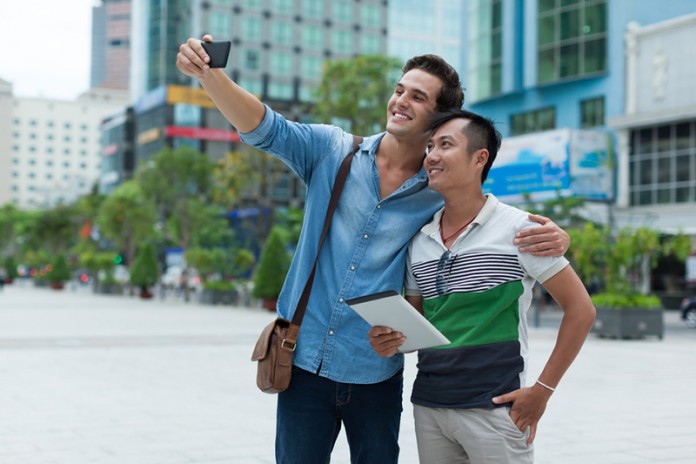 So much is written and said across the gay community about mobile phone apps, the majority of which are things such as Grindr and Scruff that help guys meet other guys, usually for instant gratification. But in an increasingly crowded market, one app has taken on all aspects of the LGBT community and succeeded above expectations.

In 2014, Michael Belkin and his team launched Distinc.tt, an LGBT social network app for people ages 13 and up, which The Wall Street Journal described as “Foursquare meets Facebook for the LGBT community.”

It was estimated that in 1999 the average age of people coming out as LGBT in the US was around 25, but ten years later that age had reduced to 16.

This could be attributed to the development of the internet and the greater feelings of safety and acceptance, but as mobile phone apps have become commonplace, more younger community members are needing that support wherever they go.

“Being an invisible minority, we have a special need to meet and interact with others.

“We saw that people were posting about things that they needed support for, such as, ‘I just came out to my parents and they didn’t take it well. What do I do now?’ or trans youth posting, ‘I’m not comfortable in my own body.’ The community was helping, but we wanted to do more,” said Belkin.

The app is based in the US and obviously many of those that use it are based there, but in Australia and New Zealand more and more people are coming across the app and taking part in the discussions or just using it to find like-minded people.

Recently Distinc.tt launched its Community Support Resources component, which users can access through the app or anyone can access online.

The 82 resources include organizations, studies, articles, and other helpful information for LGBTQQ youth as well as parents, friends, families, and educators.

The categories include helplines and chat, school and education, sex and health, legal, trans and gender identity, bullying and harassment, coming out, homelessness, depression, suicide and self-harm, and racism and diversity.

“It’s the largest and most comprehensive resource of its kind,” said Belkin.

“It can be nerve-racking to do that Google search, but if the resources are presented to you, you’re more likely to get the help you need.”