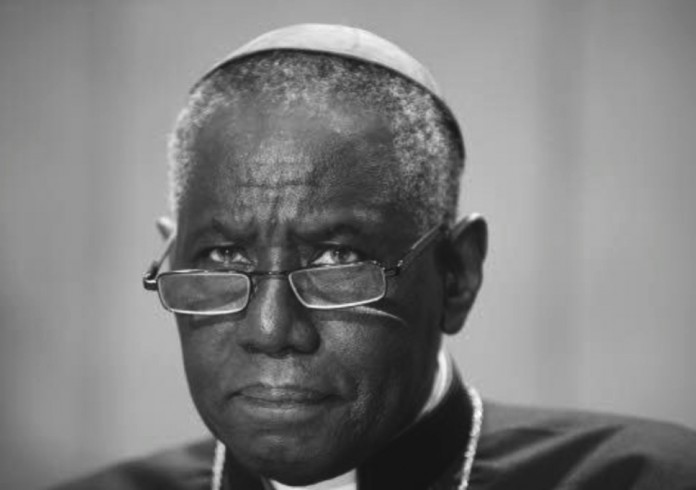 Robert Sarah, one of Africa’s top Cardinals in the Vatican hierarchy has compared homosexuality to Islamic extremism and proclaimed homosexuals to be the Communism and Nazism of the 21st Century.

The 70-year-old Cardinal’s erratic claims where made during his address to Pope Francis’ Synod on the Family, describing same-sex marriage and Islamic extremism as “two apocalyptic beasts”.

Sarah claims that humanity finds itself between gender ideology and ISIS, as the two stalk the world.

“From these two, radicalisation arise the two major threats to the family. Its subjectivist disintegration in the secularised West through quick and easy divorce, abortion, homosexual unions, euthanasia etc.”

Sarah added “On the other hand is the pseudo-family of ideologized Islam which legitimizes polygamy, female subservience, sexual slavery, child marriage.”

The Cardinal also complained that massacres by Muslim extremists and same-sex marriage “regularly contend for the front pages of the newspapers.”

Guinean-born Sarah, claims that the two ‘forces’ both have a “demonic origin” and spread spiritual confusion by demanding a universal and totalitarian rule.

“We are not contending against creatures of flesh and blood,”

“We need to be inclusive and welcoming to all that is human. But what comes from the enemy cannot and must not be assimilated. You cannot join Christ and Belial.”

“What Nazi-Fascism and Communism were in the 20th century, Western homosexual and abortion Ideologies and Islamic Fanaticism are today.”

Most people can, of course, identify the almost comical irony behind the belated rhetoric of Cardinal Robert Sarah. For all his hate, anger, and intolerance are far from the original Christian message.

His unfortunate comments draw him closer to the bigotry and backwardness of Nazism, ISIS, and the demonic influences that he speaks of.