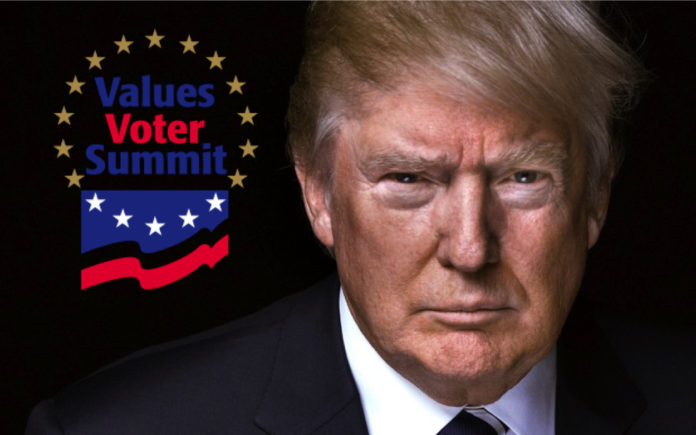 United States President, Donald Trump has told his religious right-wing supporters exactly what they wanted to hear, preaching intentions to protect ones religious freedom to discriminate.

Trump who has now become the first sitting president to address the Values Voter Summit, which is well known for its anti-LGBTI agenda, took to the stage amid chanting, applause, and praise from the host, Tony Perkins.

Perkins who is the president of the Family Research Council, a far-right anti-LGBT organisation which is classified as a hate group by the Southern Poverty Law Center, described the President as a “tremendous guy.”

Once on stage, the President preached his support for “religious freedom” guidance issued by his attorney general, Jeff Sessions last week, giving federal employees and contractors a wide berth to claim religious objections to their duties, constituting a broad license to discriminate against LGBTI people and others who might offend their religious beliefs.

Trump bragged about reinstating the policy of denying U.S. funds to any overseas family planning organisation that does not oppose abortion, and spoke proudly of the appointment of Supreme Court Justice Neil Gorsuch, a man “in the mold of the late, great Antonin Scalia,” noting that with the holiday season approaching, “We’re saying Merry Christmas again,” as if anyone had been prevented from saying that.

Prior to Trump’s appearance, the summit heard from Kellyanne Conway, Trump’s former campaign manager, who was introduced as “the woman who saved the world” by helping prevent a Hillary Clinton presidency.