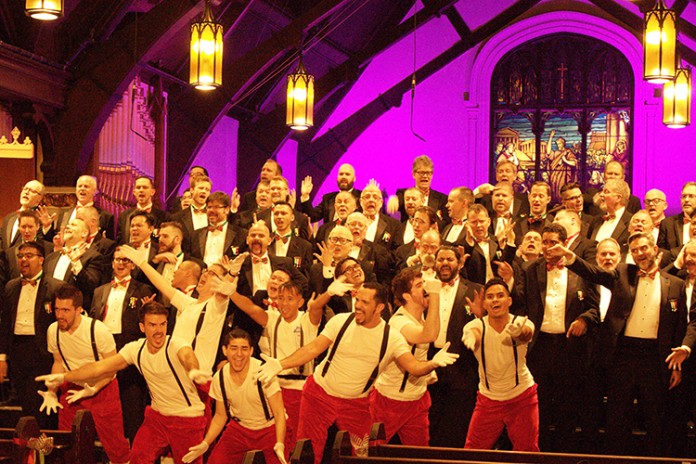 When you first step into a performance of the Vancouver Men’s Chorus it is actually a daunting experience.

It was a freezing cold night a few weeks out from Christmas last year and there I was walking up the steps of St Paul’s Anglican church in the middle of Vancouver, Canada not really knowing what to expect.

Will there be screaming queens everywhere? Will they all be semi-naked? Oh…no I’m in a church, of course, they won’t be.

But then, why would a gay men’s choir hold their shows in a church? Am I really ready to sit through a whole night of Christmas Carols? I’m here on holidays, this doesn’t really sound like fun.

But how wrong could I be.

From the minute you enter the church, the warmth in the room is palpable and not just from the heating (And yes you need heating, this is Vancouver in December after all).

You are greeted by volunteers who welcome you with that Vancouver charm and immediately you feel welcome.

As you saunter into the church, it looks and feels just like any other church, but at one end is a series of large steps just in front of the pulpit.

Reading through the programme and you immediately realise this isn’t just any little men’s choir, there are hundreds of names including singers, volunteers, support team.

One thing I specifically circled was the article about the Artistic Director and Conductor Willi Zwozdesky who is in his 34th season with the Vancouver Men’s Chorus and has conducted choirs all over America and Canada.

Then all of a sudden my programme reading was interrupted by the sound and movement of, it seemed, hundreds of men dressed in suits popping up across the church beginning to bring music to life.

For more than 30 years, they’ve delighted audiences locally and abroad with a mix of hits and custom made arrangements.

On this night, I was lucky to see and hear their Christmas performance. A collection of toe-tapping Christmas songs that I knew interspersed with new songs and some that were changed ever so slightly to make the performance just pop.

But it’s not just a recital, there is choreography, costumes, comedy and a wild gay night of fun for all who attends.

VMC Communications Chair Paul Stacey caught up with me after the show and explained that what I had just seen had been in rehearsals for about four months.

“The commitment is huge,” Stacey explained.

“The guys start with four weeks of rehearsals, this is an open rehearsal where new guys can come along.

“At about the 6th or 7th week we record ourselves so we can then start the out of session practice and learn the songs.”

The first thing you notice about Stacey is his passion for not only the job they do night after night but also the passion and love for his fellow VMC members. There is a special comradeship amongst this group of men that is palpable.

“Every night we have a good dozen volunteers involved, good solid people that help out time and time again.”

“We pay Willi the Conductor and Stephen the Accompaniest, everyone else on stage is a volunteer.

Not only does Paul Stacey look after the communications, advertising and marketing for the VMC he is also a dedicated participant and choir member in his own right. Amongst the 85 men on stage, Paul looks involved in everything and enjoying it immensely.

Stacey said the choir is known as a gay male choir but that’s not to say other men cannot take part.

“Not everyone is gay,” Stacey chuckles as he explains.

“The rumour has it we have two straight guys in the chorus.

“One guy who stands next to me has mentioned his wife a few times, he’s ok but I think he feels a bit awkward sometimes.

“He shouldn’t though we are a very welcoming bunch.”

Both the conductor and Artistic Director, Willi Zwozdesky and Accompanist Stephen Smith have led the group professionally for some time. Willi is in his 34th year as head of the choir while Stephen has been leading the music 1996.

Over the years, the VMC have conducted collaborations with a number of the biggest choirs in the World including the Seattle Men’s Chorus, Melo Men from Paris and ensembles from Toronto, Washington and San Diego. They have also had some high profile solo guests including none other than Dame Kiri Te Kanawa.

In January 2011, the Vancouver Men’s Chorus decided to produce a YouTube video for the It Gets Better campaign. They collaborated with the Vancouver Academy of Music, and sang Fred Small’s “Everything Possible”.

The next installment of the Vancouver Men’s Chorus performances will be their annual Christmas Season. Work is well underway on those Making Spirits Bright performances (in December 2015) and if it’s anything like what I saw last December it will be a cracker.

Performances will be held St Paul’s Anglican Church in Central Vancouver and they commence on December 4. Tickets can be purchased online but hurry as they sell out quickly.

Anyone wishing to join the VMC or find out more information please visit their website www.vancouvermenschorus.ca