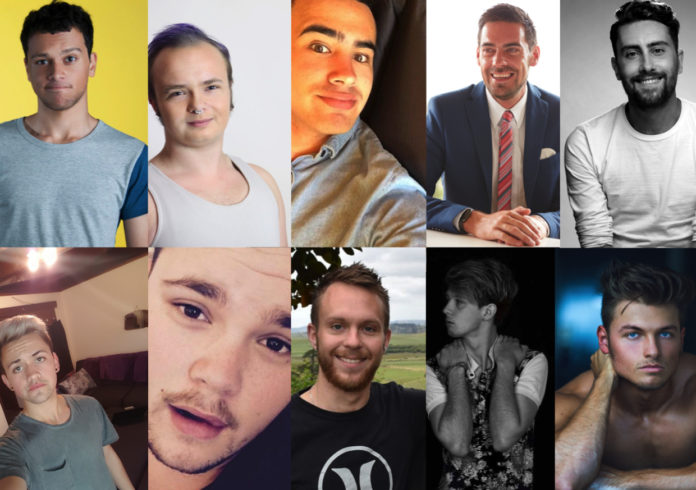 After dozens of registrations from all over New Zealand, the hunt for New Zealand’s next Mr. Gay New Zealand is one step closer with 10 finalists being selected for the final at the NZAF’s Big Gay Out.

The 10 finalists who were among dozens of candidates who put their names forward to become the Next Mr. Gay New Zealand will be required to conduct a series of tasks including, writing an article on a topic of their choice, a charity challenge, and a Q&A at the final.

All of which will help determine who will be chosen to represent New Zealand at Mr. Gay World 2017 in Madrid, Spain.

“I feel that I should be the next Mr. Gay New Zealand because I have a lot of exposure world-wide and am a dual-citizen to USA/NZ, and this means I can reach out to a wider audience to help people all over the world and maybe even convince people to visit New Zealand from other countries.”

“For me New Zealand will always be home and I love everything about it, having this opportunity would mean the world to me!”

“I feel confident in saying that I would make a great candidate for the next Mr. Gay New Zealand because I have an outgoing and courageous personality with a can-do attitude to everything in life.”

“I believe that I have a born knack for leadership since as of a very young age I have performed many roles that have required some form of peer guidance or responsibility, which I have continued to develop and used to grow as an individual.”

“I have an approachable and easy-to-talk-to personality, a crucial aspect in terms of being able to connect with and educate the youth in our community.”

“I feel I should be the next Mr. Gay New Zealand as I have a passion and a drive to fight for the key issues in the LGBTQI+ community.”

“While my age is often equated with a lack of experience and knowledge I hope to change that perception about younger people. I have started shaping this change by showing my local council that youth are interested in issues affecting them both personally and indirectly by running for council.”

“While I did not achieve my goal of being elected to a council position, I still believe that the shift was started. I believe that it is time to do that in the queer community as well. My work within the community has been strictly voluntary and I am currently a youth mentor for Waikato Queer Youth and have been for the last 3 years.”

“I feel I should be the next Mr. Gay New Zealand because I have a young voice that I feel needs to be heard within the LGBT+ community.”

“Being involved within an array of organisations has helped to highlight issues and problems that are within the rainbow community that need to be highlighted and brought to the table to be discussed.”

“I believe that being a leader and having the ability to relate to people has a strong standing as being an ambassador within the Rainbow community which are qualities I possess. My positive can-do outlook on life would help me to be an amazing candidate for the role of Mr Gay New Zealand as this would ripple onto other people within the community.”

“If I was awarded this title I would be able to reach out to more organisations around the country and reach into rural communities to help increase LGBT+ Visibility and provide safer communities for all LGBT+ People in New Zealand.”

“I feel I would be fit for Mr. Gay New Zealand because I have great leadership and communication skills, I have a lot of experience with people, and I can easily adapt to different situations.”

“I am competent enough to make the right decisions for the community and also to raise awareness on all the ‘things to look out for’ I’m not afraid to step out of my comfort zone, and I’m always ready for new challenges, which I imagine the role is full of.”

“I would like the chance to be Mr. Gay New Zealand because I’m incredibly passionate for our community and the amazing people who work every day for it.”

“The LGBTI+ community was there for me during my coming out when my family did not react in the positive way I wanted and they showed me that the saying ‘you can’t choose your family’ is very outdated as I knew I had my new family in the community to look out for me.”

“When I won Mr Gay Wellington in 2013, it was just the starting point of my journey to discover the amazing community behind Wellington and I’ve had the pleasure of meeting and working with so many incredible people along the way.”

“My drag persona has just been one avenue that I’ve been able to utilise to help with fundraisers such as hosting a concert for the celebration of the 30-year passing of the homosexual law reform where we raised money for InsideOut.”

“I’ve now worked with Universities and charity groups, started up Uni Q Massey Wellington and became their inaugural president, worked with members of the NZAF to help raise funds and awareness of AIDS and HIV and my plans to assist these groups whether it be through performances or administrative work will not stop anytime soon.”

“I’m sure I’m not the only one who has had a difficult journey with their sexuality and I want to continue working with groups not only just in Wellington, but other cities, even those who don’t have the bigger community hub like we do in Wellington to show that there are so many people in New Zealand who are here to help and that no-one is ever alone.”

“I was really nervous and debated long and hard before entering Mr. Gay NZ but this amazing opportunity to educate around HIV and the stigma that surrounds it made me apply.”

“For people living with HIV such as myself there is often a perception that we are unclean, lesser people, and that we aren’t deserving of respect or dignity. That makes living openly and authentically really difficult.”

“This is an opportunity to challenge that. We are just as eloquent, capable, attractive and wonderful as everyone else in our community and it would be an honour to represent the progressive country I know New Zealand to be, as an openly, and unashamed HIV+ gay man.”

“Becoming Mr. Gay New Zealand would be such an honor, but I would get more pleasure out of speaking out and aiding in Teen Homelessness, Reducing teen suicide, HIV Prevention, and being an advocate for LGBTI Rights and Self Acceptance.”

“I think that having a trans guy be Mr. Gay New Zealand would be a massive deal for the transgender community in New Zealand.”

“I also think that having someone who is differently abled would be a wonderful example for other aspiring leaders who have bodies they were taught cannot lead them to success. I’ve already proved myself to be a capable leader, as I was awarded Mr. Gay Wellington in 2016.”

“I’m confident that even by entering this contest, I’ll be spreading hope. Winning and going on to Mr. Gay World would be an unprecedented victory for diversity of representation in our community.”

“Mr. Gay New Zealand gives me a platform to speak about LGBTTQI+ issues.”

“In an increasing divided political climate, strong voices for inclusion are more important than ever before. As communities, we need to unite and organise. I believe I have the skills and experience to facilitate that conversation.”