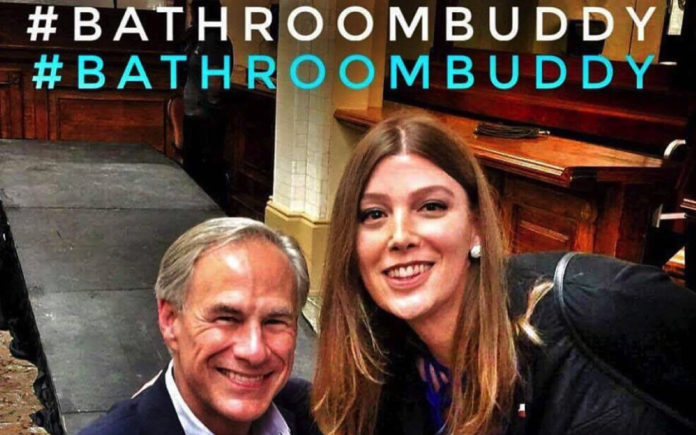 Anti-transgender governor from Texas has been left red faced, following a transgender woman’s prank which has since gone viral across the internet.

Ashley Smith, who had her photograph taken with Texas Governor Greg Abbott who is currently pushing anti-transgender “bathroom bill” legislation, shared her photo on Facebook, with the caption “How will the Potty Police know I’m transgender if the Governor doesn’t?”

Giving her photo the hashtag #BathroomBuddy, the photo has since gone viral, amassing thousands of likes and shares, plus considerable media coverage.

As reported by San Antonio Express-News, Abbott was in town to announce his intention to run for reelection. Smith attended the rally with the intention of getting the governor to pose for the photo after the speech.

The San Antonio local who on her Facebook page identifies as an “Architect, Trans-woman, Activist, Snowflake.” explains “I did not think shouting would work, or that I would be heard and was more interested in the getting the photograph and not getting thrown out.”

A similar law recently passed in North Carolina last year, resulting in international outrage in conjunction with numerous boycotts that have since cost the state billions of dollars in lost revenue.

As a result of the proposed bathroom ban, Texas-based businesses have written the to their governor urging the bill not be passed, highlighting that any such bill would ultimately hurt their ability to attract talented workers.

Despite the backlash, Abbott says he wants a consistent bathroom policy throughout the state to protect women and children, as opposed to a “patchwork” of policies varying from town to town.