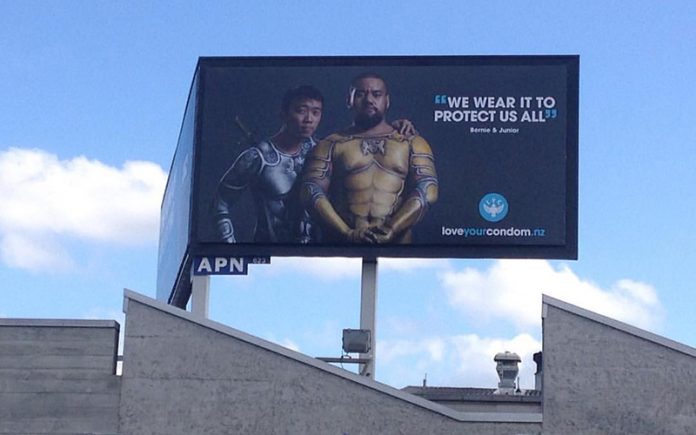 Mr Gay New Zealand Bernard Lee has returned from Malta and is now appearing all over the country in a brand new advertising billboard campaign by LYC.

Rising high above Ponsonby Road in Auckland is the “Super Hero” billboard adorned with Bernie and Junz Ono Nesi.

The campaign run by LYC is to encourage men to use condoms for sex and in an associated video campaign, the boys explain how their choice to use condoms affects them, their family, friends, and community.

This campaigns lines up with the official New Zealand AIDS Foundation(NZAF) May testing month which began on Sunday.

Based on data from Otago University’s AIDS Epidemiology Group figures it is estimated that approximately 600 people live with HIV and don’t yet know it, the majority of whom are gay and bisexual men.

Once diagnosed, research shows that if a person living with HIV, takes HIV medication, resulting in an undetectable viral load, they will have a substantially reduced risk of passing on HIV to sexual partners as well as protecting their own health.

NZAF’s National HIV Testing Month focuses on testing and raising awareness of the importance of testing in HIV prevention.

“It all starts with testing; we need to significantly increase rates of HIV testing, particularly among those gay and bisexual men who have had unprotected sex with casual partners,” says Shaun Robinson, Executive Director, New Zealand AIDS Foundation.

“Test and treat is recommended by the World Health Organisation (WHO). WHO guidelines are that anyone diagnosed with HIV should begin antiretroviral treatment as soon as possible after diagnosis,” says Mr. Robinson.

To book an appointment visit www.gettested.co.nz