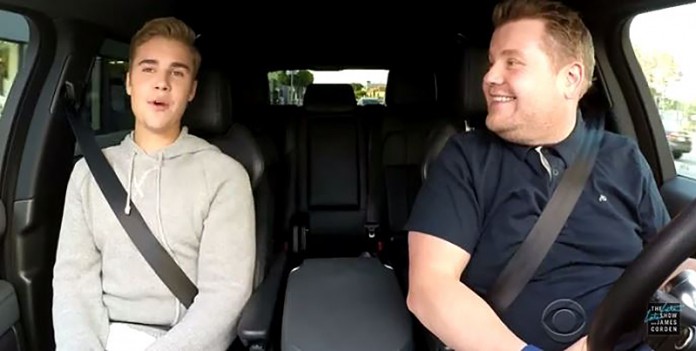 The Prince of Pop Justin Bieber has featured in an hilarious carpooling segment featuring The Late Late Show’s James Corden on US television this week.

The skit involves James Corden carpooling with Justin Bieber through Los Angeles to The Late Late Show studios and it shows Bieber returning to his original persona, the Bieber that people (mostly 12 year old girls and twink loving gay boys) fell in love with.

This hilarious carpool has Corden playing some of Bieber’s biggest hits with the star singing along to his classic songs.

Bieber is also challenged to swap his clothing with Corden, answer questions about his personal life and finish a Rubik’s Cube in under two minutes(And yes he did it, just watch).

Justin Bieber has received a bit of a bad reputation in recent years, however he seems to be back on the up, even apologising and admitting on his very own ‘Comedy Central Roast’ that he’s made mistakes and that he’s disappointed in the things that he has done.

“It’s how you rise from a fall that truly defines you as a man,” he explained on the roast.

Bieber is now 21 and showing that he is maturing. At the end of the day as teenagers we all did stupid things, most of us still do. However we didn’t have cameras in our faces 24/7 recording our every movement.

When put in perspective, Justin Bieber was not being anything other than a teenager.

A teenager with an awful lot of fame, money and unwanted attention.

Admittedly and predictably I am a Belieber (a Justin Bieber Fan)and I respect the fact that he’s made it on his own, and is a talented musician.

I believe in giving people a fair go, lets cut my look-a-like some slack and not hate on a kid for being a kid.