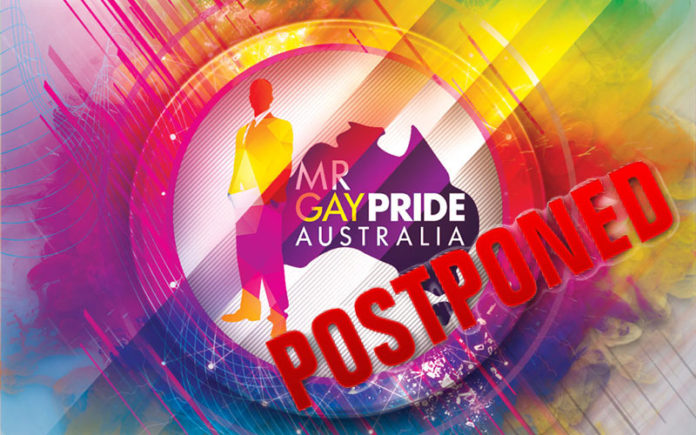 Due to the unfortunate cancelling of the Rainbow on the Plains Festival in Hay in two weeks time, the 2020 Mr Gay Pride Australia competition has been halted.

As a result of the coronavirus pandemic, any organised gatherings in Australia of 500 people or more have been asked to cancel to avoid mass social contact and the growing spread of the virus in the community.

After careful consideration, the Rainbow on the Plains festival in Hay NSW, which was to host the finale weekend of Mr Gay Pride Australia 2020, which is proudly sponsored by Trustpilot, had no other choice but to cancel their event, effectively removing the competition’s community stage of the competition.

Mr Gay Pride Australia Producer David Francis said partnering with a local pride festival and giving the delegates an outlet for that finale weekend is crucial to the competition.

“Without the local community aspect, the competition cannot complete many of the challenges needed to find the next LGBTI leader in Australia,” Francis said.

“It is really important that our delegates not only complete online tasks but have the chance to be included in a community event such as Rainbow on the Plains and now without such an outlet we have to put the competition on hold for the time being.

“Our 2020 delegates have so far completed their online opinion article pieces and were expected to begin public voting today. We will now hold this off until we know where and when we will be completing the competition.”

There is no timeline associated with the public gathering rule so it is difficult to suggest when the ban would be lifted to allow further pride events to be held in Australia.

Some are suggesting it could be August before any events will be able to be held with mass gatherings.

“Due to this issue being so fluid and changing every day, we won’t be able to make any firm decision on what happens next with the competition for 2020,” Francis reiterated.

“Once the pandemic takes its course and things become clearer we will then start to work through issues of possible places that we can hold the remaining part of the competition.

“All of our delegates have been kept in the loop about the changes and we hope in the meantime the team as a group can continue to work together and help each other to tackle some of their own initiatives, even without the competition running its course.”

The 2020 Mr Gay World Competition, which was to be held in South Africa in late April has also been postponed with no new date or venue allocated at this stage.